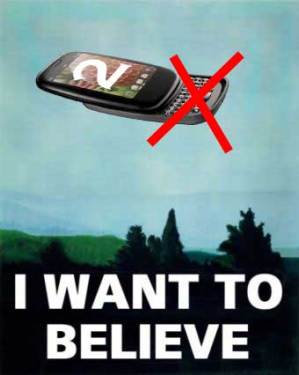 HP/Palm is apparently working on a touchscreen-only phone with a high-resolution screen, and it’s going by the codename “Mansion”, a tipster tells Palm fansite Pre Central.

The news doesn’t come as a huge surprise. While Palm spent a lot of time hyping up the Pre’s keyboard before its launch, there’s still room for a webOS device that only rocks a touchscreen. The many consumers choosing to pick up iPhones and touchscreen-only Android phones certainly prove that users today aren’t as skittish about virtual keyboards as they once were. And besides, many likely don’t even have any experience with a keyboard-equipped smartphone.

Palm also sorely needs a device with a larger screen than the Pre, which is stuck with a tiny (by today’s standards) 3.1-inch screen. WebOS is a gorgeous and touchscreen-friendly operating system — if Palm managed to bring out a 4-inch webOS device, it would certainly be a head turner.

The Mansion’s rumored high-resolution also points to a bigger screen. The Pre has a diminutive 480 pixel by 320 pixel resolution, whereas the tipster says the Mansion runs at 800 by 480 — putting it on par with large-screened Android devices like the Droid X and Nexus One. It’s also close to the iPhone 4’s “Retina Display”, which runs at 960 by 640.

There’s not much else to this rumor yet, though it’s worth mentioning that the Palm Pre’s original codename was “Castle” — which seems to fit the Mansion naming motif. At this point, I’d be more surprised if HP/Palm wasn’t working on a touchscreen-only webOS device. We know that a webOS tablet is on the way, so it makes sense for the company to explore other touchscreen-only options. Plus it now gives HP/Palm a way to entice users who never cared for the Pre’s hardware keyboard.