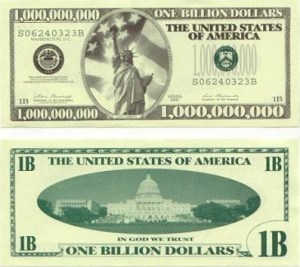 Last August, upon seeing the quick success of the App Store, Apple chief executive Steve Jobs foresaw a big future for the store. “This thing’s going to crest a half a billion, soon. Who knows, maybe it will be a $1 billion marketplace at some point in time,” he told the Wall Street Journal.

That “some point in time,” may come much sooner than he thought, if some extrapolated data from Needham & Co. analyst Charlie Wolf proves accurate. In fact, it could be as soon as this year, as AppleInsider notes.

Wolf took the numbers reported in the company’s last quarter that indicated a $303 million increase in the company’s music-related sales — which refers to both iTunes and App Store sales as well as sales for iPod accessories. Now, Wolf assumes flat growth for the iTunes component (which may or may not be accurate) and iPod accessory growth in line with iPod sales growth, so he subtracts $100 million to arrive at over $200 million in App Store sales for the quarter.

Of course, as I noted, that projection is based on some assumptions, because Apple doesn’t break down sales figures for those outside of the company. But it at least sounds plausible, and if Jobs noted that it was going to “crest a half a billion, soon” back in August, then given how much the App Store has grown since, it may even be ahead of the billion dollar mark already.

The fact is, anyway you slice it, the App Store has been a huge success for Apple. While complaints about app quality and openness remain an issue, the store continues to plow forward, with over 25,000 apps now. And with similar app stores now being offered by Google for Android, and others on the way from RIM, Microsoft, Symbian, Palm and others, Apple may have its best indicator of its success.

If imitation is the sincerest form of flattery, the App Store should be blushing.