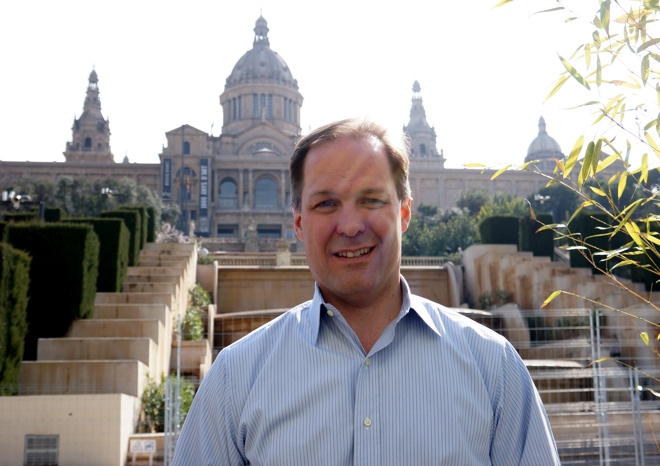 It’s easy to think of mobile wallet solutions from companies Google, PayPal, and Isis as locked in a heated battle for the future of payments. But according to Michael Abbott, CEO of the mobile payments company Isis, that’s far from the case.

“There is no mobile wallet war out there,” Abbott told VentureBeat in an interview at the Mobile World Congress yesterday. Instead, he sees all the companies exploring mobile payments now as something that will benefit everyone, including consumers, retailers, carriers, and everyone else involved in the mobile payments chain.

For lack of a proper meeting space, we sat outdoors on a couch in the middle of the Mobile World Congress madness. Directly behind Abbott was the National Art Museum of Catalonia, an imposing and grand building that looks down on the conference housed at the Fira de Barcelona convention center.

The spirit of Barcelona gives almost everything at MWC an extra layer of magic, so my judgement may have been clouded. But as I discussed the future of mobile payments and Isis’ slow-and-steady launch with Abbott, I couldn’t help but think he had a point. We’re facing a sea change with the rise of mobile payments, and now anything that helps to communicate the benefits of paying with your phone versus a dumb credit card will help consumers understand, and ultimately adopt, mobile payments.

Isis, which is jointly owned by AT&T, Verizon, and T-Mobile, is developing a mobile payments network based on near-field communication (NFC) technology. The idea is that you’ll be able to swipe your phone to make purchases instantly and securely. NFC-based swipe and pay is something Google is also exploring with Google Wallet, as well as PayPal with its upcoming wallet (PayPal already offers a way to easily transfer money with NFC).

Isis yesterday announced its first bank partners, Chase, Capital One, and Barclaycard, a big step for the company. The banks have agreed to let their credit, debit, and prepaid cards work with Isis’s mobile wallet. Isis test users in Salt Lake City, Utah and Austin, Texas will be able to add their cards from the companies to Isis in mid-2012.

The bank support comes on top of the payment network partnerships Isis made last year with Visa, MasterCard, Discovery, and American Express.

It may seem like things are moving slowly for Isis, which was first announced back in November 2010. But Abbott says he wouldn’t have it any other way. The company is putting the pieces together for a payment network that will last for more than a decade, Abbott said, so he sees no need to rush out with a half-baked solution.

“We’re solving for a four-sided market,” he said, pointing to the fact that Isis needs to make sure consumers, merchants, payment companies, and its parent carriers are happy with its product.

When I asked if Isis has any contingency plans in mind if NFC doesn’t take off, Abbott said that the company is “looking at everything that works.” He stressed that any mobile payments technology must be secure, cost-effective, and most importantly, fast. After all, if it’s faster and easier to keep using your credit card for purchases, mobile payments will never take off. PayPal, and its parent company eBay, currently have their fingers in other mobile payments solutions, like carrier billing and scanning with QR codes.

So what’s next for Isis? Abbott says that the company will now focus on the consumer side of things, as well as with device makers in the fall. Isis has no release schedule in mind for its mobile wallet, instead, the company is taking a “when it’s ready attitude.”

Given that Isis basically has one shot to get mobile payments right, I don’t blame the company for taking its time to launch.