Japan’s spending on mobile apps has skyrocketed in the last year. In fact, from about 36 percent of U.S. spending in October 2012, Japan has now surpassed the United States to become the most important country in the world for app spending.

And Google Play monetization has now caught up to iOS in Japan, according to a new App Annie report. 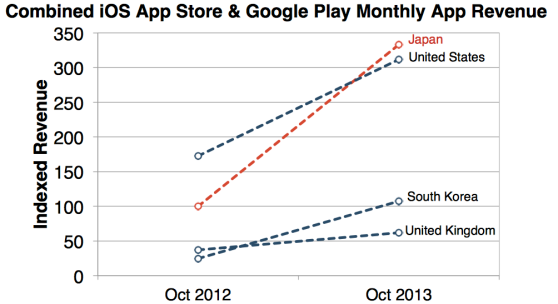 That’s because Japanese consumers have a long history of buying mobile data, App Annie says, spending over 500 billion yen as far back as 2009 — on feature phones — and spending over 800 billion yen, or almost $8 billion U.S., in 2012. But only in that year, 2012, did the country’s spending start to significantly shift to smartphones, putting the country on the map for app store revenue.

Google played right into Japanese consumers’ hands in 2011 when it added carrier billing for Google Play apps and media, which the Japanese market was used to. Currently, Android owners on NTT Docomo, KDDI, and Softbank can pay for their apps, or Google books, or Google music in a single payment, along with their airtime, data, and messaging fees, right to their carrier. 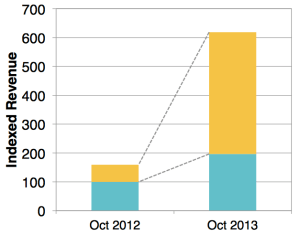 Above: Game revenue in Japan, including both iOS and Google Play

The top five publishers of games and gaming content have seen their revenue soar, jumping almost 800 percent in the last 12 months. Those include GungHo Online, LINE, COLOPL, Sega, and Namco Bandai, and they are almost solely responsible for the massive surge in Japanese mobile app spending. From almost nothing in October 2012, GungHo Online’s Puzzles and Dragons, for example, has jumped to 20 million downloads. And COLOPL’s Home Run Hitters rocketed to 10 million downloads in just over five months, starting in May of this year.

LINE, which is perpetually in the app store and Google Play leaderboards, is now at 300 million users and has monetized its messaging app largely by becoming a gaming platform.

Over the next 12 months, App Annie sees app growth continuing, and it expects Google Play revenue growth to continue to outstrip the iOS app store as Apple’s share of the smartphone market in Japan tails off.