Jawbone is putting the pieces in place to become a wearable health technology leader.

The company announced today that it’s acquiring BodyMedia, creator of sophisticated health tracking devices used on the TV show The Biggest Loser. Additionally, Jawbone is launching an app platform for its Up health wristband today, allowing third-party companies to integrate their services with Jawbone’s data.

Acquiring BodyMedia, a bet on the future

“BodyMedia has created one of the world’s largest libraries of raw and real-world human sensor data, with 500 trillion data points,” noted Jawbone’s Travis Bogard, VP of product management and strategy, in an interview with VentureBeat (emphasis ours). That figure alone should tell you why Jawbone was eager to snap up BodyMedia.

Terms of the deal weren’t disclosed, but AllThingsD is hearing that it was worth more than $100 million.

BodyMedia has been around for 14 years, and it’s been pursuing wearable health devices long before the category was popularized by the likes of Jawbone’s Up, Fitbit, and Nike’s Fuelband. The company recently launched an updated version of its Core health tracker armband. Perhaps most significantly, BodyMedia is also the only health tracking company to get its technology registered with the FDA as a Class II medical device (which means it’s been proven to help you lose weight).

According to Bogard, the two companies have 200 to 300 issued or pending patents between them. That gives Jawbone plenty of leverage in the nascent health tech and wearable computing industries.

It’s not hard to imagine how BodyMedia’s technology could be applied to Jawbone’s Up down the line. While the Up does a great job of tracking your steps and sleep habits, BodyMedia’s recent Core 2 armband can also track your heart rate, temperature, heat flux, galvanic skin response (sweat), and motion (with a wider array of sensors).

For now, the two companies’ product lines will remain separate, Bogard told me. BodyMedia will stay headquartered in Pittsburgh, and it’s entire team will be joining Jawbone. 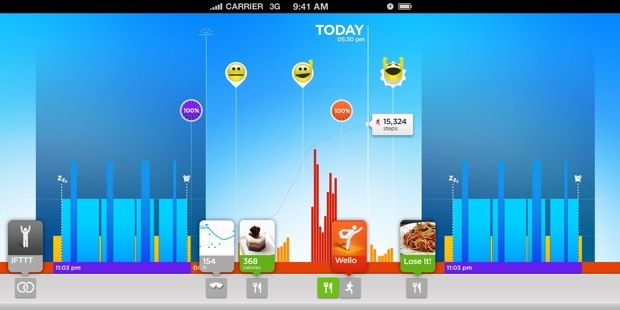 Up opens to apps

Almost as significant as the BodyMedia acquisition, Jawbone is launching the Up app platform today with 10 partners, including RunKeeper, MapMyFitness, WiThings, and IFTTT (If this then that).

It seemed inevitable that Jawbone would eventually make its Up platform interoperable with other apps. It’s the perfect way to attract users of other fitness services, and it’s also a fun way to keep existing Up users interested in continuing to track their health.

“It’s really about the user perspective here … I think a lot of API projects in the past have been very read-only focused,” said Jawbone’s Brad Kittredge, director of product management for Up, in an interview with VentureBeat. “We know there are a lot of things that are complementary with the Up experience.”

For the most part, the apps make it easier to bring their data into your Up activity charts — for example, a RunKeeper session can be automatically plugged into your Up data once it’s completed. The integration is a win for both Jawbone and the third-party service, since it will likely encourage you to use both.

Jawbone also lets you make your data available to the partner services. So, for example, your Up sleep data could be used to inform your Sleepio profile (a service that helps you deal with sleeplessness).

For now, the apps are only accessible on Up’s iOS app (Android support is coming). You can add and configure them from within the Up app, as well as select exactly what data specific apps have access to.

Jawbone has been thinking about how to open up its platform ever since it launched the health wristband, Kittredge told me. For now, partners will have to contact Jawbone to be included in the app platform. But the company plans to offer a more open API down the line.

San Francisco-based Jawbone has raised $202 million in funding so far from Kleiner Perkins, Andreessen Horowitz, and others.