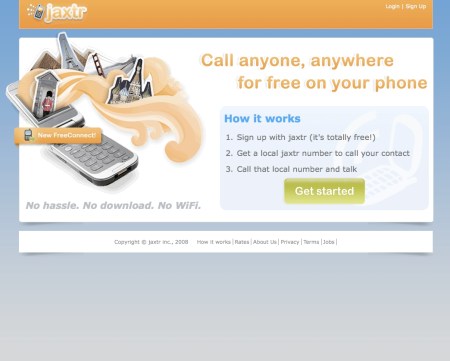 Jaxtr, one of the low-cost Internet calling players, is introducing its FreeConnect service today, which will allow members to make unlimited free mobile or landline calls to other members of the Jaxtr network worldwide.

Previously, callers had to pay a few cents a minute using Jaxtr’s credits, or Jax, to talk to others on mobile phones.

The move is intended to spark uptake among new users, following a lull in recent months. Customers will still have to pay for calls made to someone outside of the Jaxtr network and for calls made using a slightly more convenient approach.

“We believe a big portion of the free callers will convert to paid calling,” said Bahman Koohestani, chief executive of the Menlo Park, Calif.-based company. “The number of people who do that can make up for the people who only do free calls.”

That’s an interesting bet. Advertising and sponsorships are a small part of revenues now, so paid calls are the way that Jaxtr has to make its money. Skype, the Internet calling service owned by eBay, has similar plans where it offers in-network calls for free but charges for calls outside the network.

Koohestani said the company has been working toward delivering free calling service for some time. If users perceive this calling plan as a bargain, it could certainly shake up the VoIP calling market — not to mention the multibillion-dollar overseas calling card and long distance markets — which has relied on paid calls to date.

To make a call, users have to sign up for a Jaxtr account on the company’s web site. Then they enter the number of the Jaxtr member they wish to call. Jaxtr will give them a local number to reach that person. Once they initiate the call, Jaxtr notifies the person they are calling via an SMS text message. That text message has a number that the callee will dial. Once that callee dials, the two parties are connected directly on a regular local call. They can talk for as long as they like and use the local numbers repeatedly. Members can call out of the network, but they have to use their Jax credits for that.

The service grew quickly until this summer, when the company started charging for certain kinds of premium calls. But Jaxtr still has more than 10 million users in 220 countries.

Members can post their Jaxtr phone links on their Facebook, LinkedIn, and other social networking profiles so they can receive calls while keeping their phone numbers private. Jaxtr works with any mobile or landline phone.

Rivals include VoIP social communication companies such as mig33 and Jajah, both of which also have millions of users. Jajah also boasts more than 10 million users in more than 200 countries. mig33, based in Burlingame, Calif. launched new services last month to supplement its VoIP calling. But unlike with Jaxtr, mig33 users have to download software to their mobile phone. mig33 raised its own $13.5 million round in January. Another competitor, Jangl, went out of business in May, and its assets were sold to Live Universe.

Jaxtr’s has raised more than $20 million dollars in funding to date, and its investors include three of Skype’s original investors. The latest round in June was led by Lehman Brothers Venture Partners.

The company, which currently has a staff of 26, has been through several leadership changes since it was founded in 2005. Konstantin Guericke, a cofounder of the LinkedIn business social network, joined as CEO in 2007. After the downturn hit, the company laid off about 10 of its employees, and Guericke resigned at the end of October. Koohestani, who was hired in August, replaced Geuricke, who is still on the board.