Apple design chief Jony Ive officially announced his impending departure from the company last week, but apart from expressing an interest in working on some non-Apple projects, his reasons for leaving weren’t entirely clear. Now a Wall Street Journal report offers a more detailed look at the situation, which is apparently the result of years-long malaise due to CEO Tim Cook’s refocusing of Apple operations.

While Bloomberg was the first to note that Ive dramatically cut back his time at Apple’s offices after the Apple Watch launched in 2015, “coming to headquarters as little as twice a week,” the publication barely touched on the internationally famous designer’s frustrations with the company in the Cook era. The Wall Street Journal report suggests Cook’s lack of interest in product design and focus on operations — essentially keeping production running smoothly by minimizing manufacturing risks — stifled the company’s ability to innovate.

Prior to Cook’s ascendance, Ive worked hand in hand with late Apple CEO Steve Jobs on product designs, and the company’s designers dictated the direction for new releases. But when Cook took over as CEO, he apparently discontinued Jobs’ practice of frequently visiting the design studio, dispiriting Ive and other designers. While Cook compensated Ive well enough to draw comment from other top Apple executives, he reportedly upset the designer by filling the company’s board with more operations and finance experts, “rather than technology or other areas of the company’s core business.”

Regardless, Ive reportedly pushed the company to develop the Apple Watch, becoming heavily involved in both hardware and software design, as well as hiring fashion experts to help design and market the first true Apple wearable. Following executive disagreements as to how the product should be positioned — iPhone-tethered or independent, affordable or expensive — the early model underperformed Apple’s own expectations, selling only 10 million units compared with the company’s 40 million forecast and leaving thousands of the deluxe $10,000-$17,000 gold version unsold.

Describing himself as deeply tired after the launch, Ive stepped back from day-to-day design management while receiving a promotion to chief design officer, ultimately leaving the design team rudderless. Working closer to his homes in San Francisco, Hawaii, and the U.K., Ive reportedly “rarely” showed up to monthly software design meetings he promised to attend and failed to provide needed guidance on key iPhone X human interface changes. And he didn’t attend the official opening event for the Apple Park headquarters, which he helped to design. Meanwhile, multiple members of the design team left the company without providing reasons for their departures.

While the Wall Street Journal report notes that Ive’s decision comes after a string of troubled product releases — disappointing iPhone sales, a “flopped” HomePod, and an abruptly cancelled AirPower — Apple remains one of the world’s largest and most successful companies, despite seemingly treading water with announcements in recent years. The report notes that beyond updates to existing products, the design team is “working on augmented reality glasses that would give users visual displays of messages and maps.” These glasses, like the Watch, will be a critical test of the company’s ability to popularize a nascent wearable technology.

Ive said last week that he is starting LoveFrom, a design company that will provide services to Apple and other companies, initially from California. Meanwhile, Apple’s remaining designers will now report to COO Jeff Williams, who has made multiple appearances at company events discussing health-related initiatives and was said to be heavily involved in the Apple Watch project.

Updated July 2 at 6:23 a.m. Pacific: Following publication of the Wall Street Journal report, Apple CEO Tim Cook told NBC News in an emailed response that the “story is absurd,” suggesting that it doesn’t reflect the realities at Apple. The full email is included below. 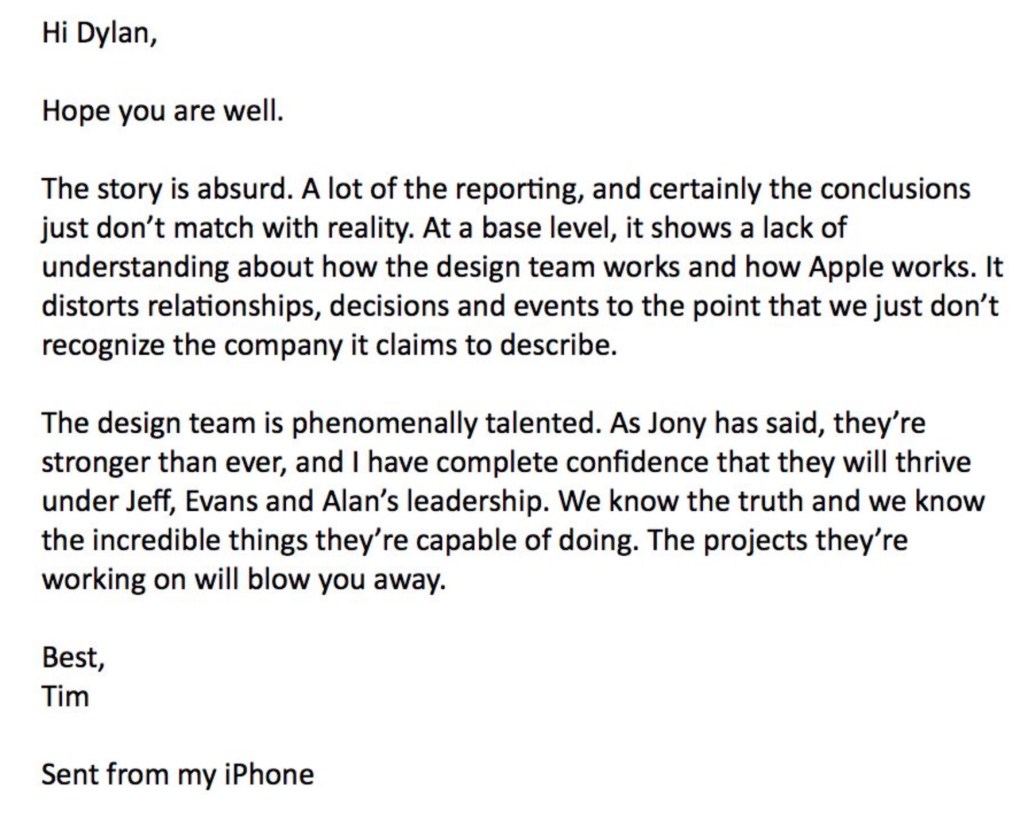 While Cook expressed “complete confidence” in the design team and said that the “projects they’re working on will blow you away,” both his response and its characterization by NBC were quickly met with skepticism on social media, as observers pointed out that the company neither identified specific inaccuracies nor offered comment when asked to do so for the original story. Last year, Cook called for Bloomberg to retract a story alleging that Apple was aware of Chinese-implanted spy chips in servers supplied by Super Micro, but the publication refused to do so, citing faith in its reporting.