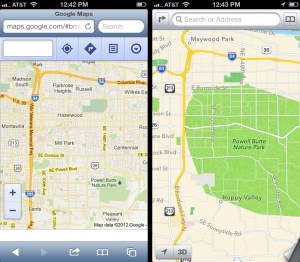 Unless you’ve been living under a rock, you’ve heard that the maps application in iOS  is awful. It is so bad, Apple actually apologized. What we haven’t seen until now is just how badly iOS 6 is hurting usage of Apple’s maps.

A company called Snappli, which just launched a few weeks ago (see coverage here and here) is a free mobile app that helps people stay within their mobile data limits by compressing and optimizing mobile data as well as video. Today they pulled some pretty interesting data around Google/Apple Maps, based on data from Snappli users in the UK and US. 64 percent of Snappli users in the U.S. and UK have migrated to iOS 6 in the past few weeks. Here’s Snappli’s summary of what those users did after upgrading:

In other words, only 1 in 25 people are using Apple maps — and that number is still falling.

This data is based on the 5,000 users that started using iOS 6 recently. Also, this data is a few days old.

Now this is just one data point and not enough to make general conclusions, but I would not be surprised if this is just the beginning of more evidence that Apple users will not put up with degraded user experiences.