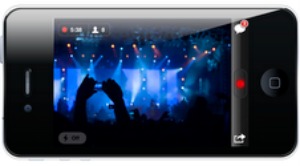 Live video streaming site Justin.tv today announced an update that includes what it has dubbed “Frame Reinsertion,” which will allow users to upload the full resolution version of a video in the background, even as the video is being broadcast live.

Justin.tv lets users stream content live to the internet, whether it is from their webcams, mobile phones or wired in from a TV. Its competitors include Ustream.TV, blogTV and Flixwagon.

It is currently available on iPhone and Android smartphones. It has 3.6 million total mobile application installs, with 20 percent of JTV users using mobile apps and 27,000 hours of mobile video since their launch of mobile apps in September.

Live streaming has become a particularly popular form of media consumption, with live stream usage jumping 650 percent this year when compared to 2009.

The company has made a major push into a the mobile space via a consumer-driven “YouTube model” for live streaming over the last eight months or so, a decision which led to the departure of former chief business officer David Aufhauser in October of this year.

The broadcasting quality of live video via mobile device has always been constrained by the network conditions during broadcast, with broadcasters automatically adjusting for any given network conditions during broadcast. That means that when broadcast over 3G or WiFi, the quality can be very good, but when broadcast over slower networks like slower networks like AT&T’s EDGE, users can often be frustrated by the speed and quality of their downloads.

But the San Francisco-based startup says it has now crossed that gap in quality — after it realized that 90 percent or more of their video views were post-live, archive views, not live viewing.

That was the key they said they needed to make it easier for them to reconfigure their app to stream content more smoothly and at a much higher quality than it had before.

“Quality has always been a major stumbling block for mobile live video, and something that is holding the technology back from broader adoption,” Matthew DiPietro, vice president of marketing and communications told VentureBeat. “But now we really feel like we’ve cracked the code on this.”