InFocus today debuted the Kangaroo, a $99 Windows 10 portable PC that “goes anywhere and works with any screen.” The term “mobile desktop” may seem like an oxymoron, but that really is the best description: Picture your typical desktop PC tower shrunk down to the size of a phablet sans screen; just like any desktop, you’ll still need to connect a mouse, keyboard, and monitor. Kangaroo is available on Newegg now, and will go on sale at the Microsoft Store by mid-November.

The pitch is simple: Kangaroo offers the power of a cheap full-sized computer with the convenience and mobility of a cell phone. The black satin aluminum device is powered by an Intel Cherrytrail (Z8500) SOC, 2GB of RAM, 32GB of storage (only about 18GB is free when you first start it, but storage is expandable via a microSD card), and an on-board battery (up to four hours of “casual use”). The standalone Kangaroo Dock, which you can swap out for other future docks, includes an HDMI port and two USB ports. 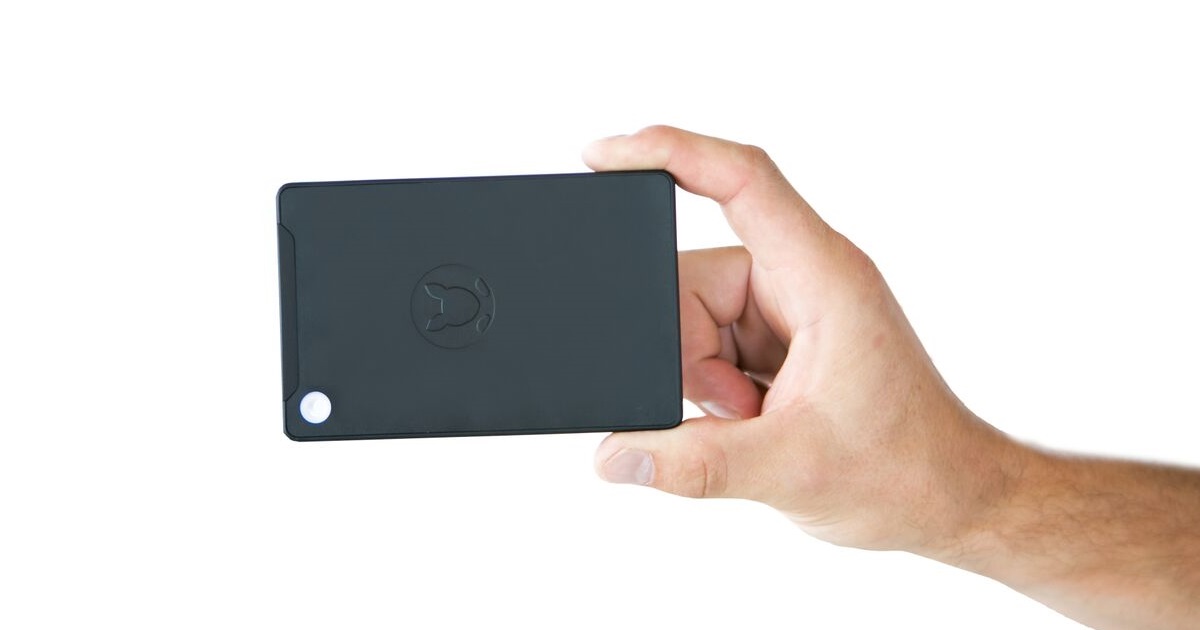 I had a chance to play with the Kangaroo, which is available initially in North America, and I came away impressed. There was no setup required: I plugged in the HDMI cable to my TV, the power cable to the wall outlet, and off I went. Impressively, the Kangaroo took less than 30 seconds to boot (though that will likely slow down with time).

I plugged in a mouse, and when I realized it was possible to write this article on the Kangaroo, a keyboard as well. InFocus calls the Kangaroo “a no-compromise PC at a no-pain price that makes Windows 10 accessible to anyone.” That’s of course a big stretch, but I did find the device incredibly small and light given the functionality it packs.

This really is a completely functioning PC. It isn’t running Starter or some other basic edition of Windows — the Kangaroo comes with Windows 10 Home: 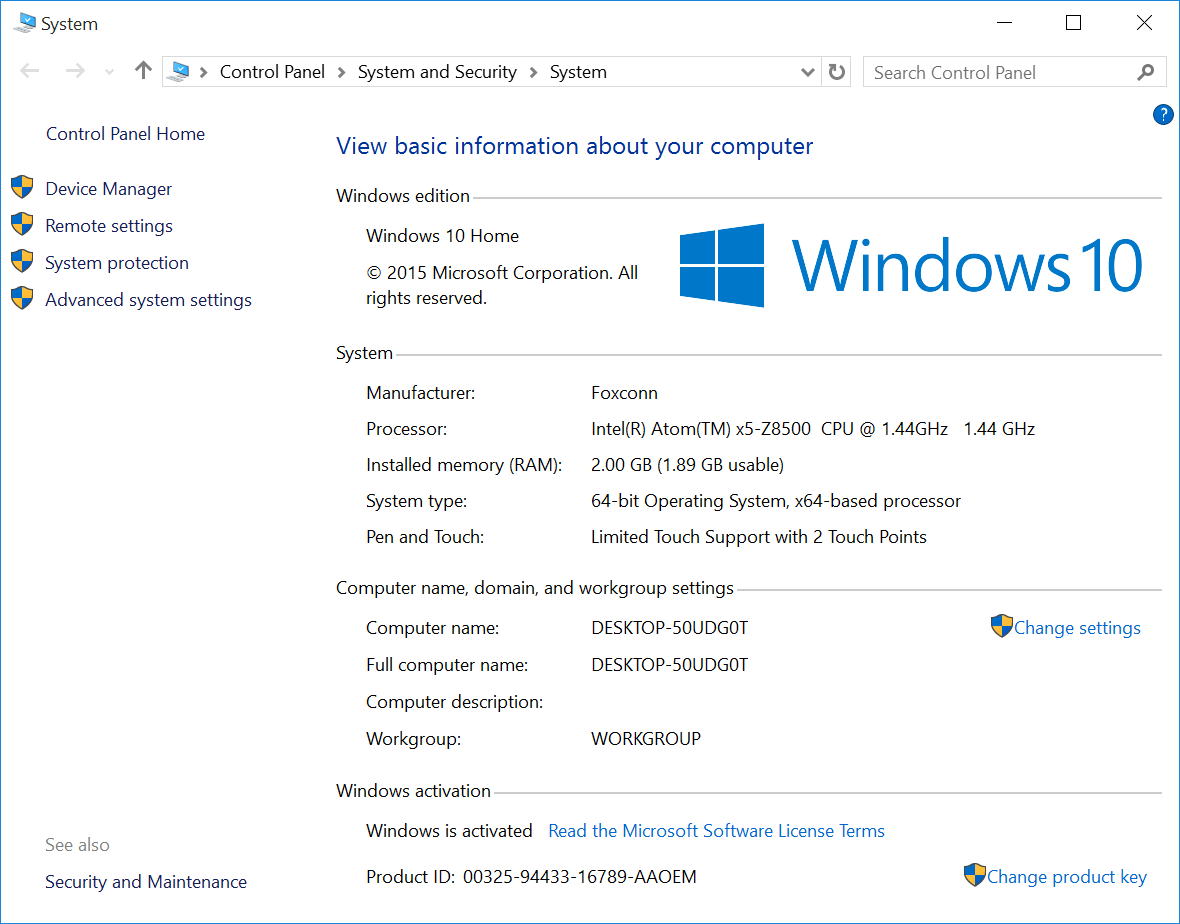 Windows Hello integration means the fingerprint reader (pictured below) on the side of the Kangaroo lets you log in without a password or PIN. It’s quite easy to set up: Just a few taps and your fingerprint is saved so you don’t have to type in anything to access this mobile PC.

Because the main connection is over HDMI, sound works right away if you’re using something like a TV. Indeed, I had music blasting the whole time I was writing. 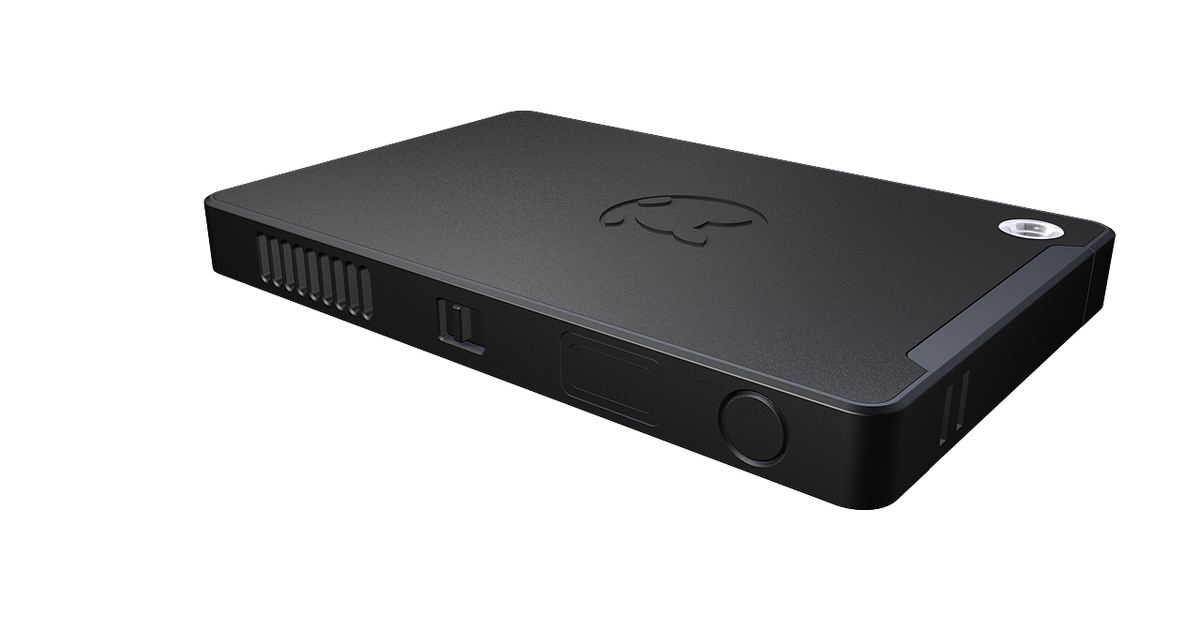 The built-in Wi-Fi works, though I wish it was a tad faster. This was the only real letdown — the Kangaroo feels incredibly quick despite its low specifications. Chances are you will only notice Wi-Fi problems if you are very far away from the source (quick tests showed that the Wi-Fi chip in the Kangaroo is simply not as powerful as the one found in an expensive laptop, but that’s no surprise).

That said, I would love if one of the future swappable docks came with an Ethernet port. After all, if I’m plugging in a monitor or a TV, I’m not going anywhere.

One thing that absolutely shocked me was what happened when I decided to just remove the Dock from the Kangaroo while it was on. Keep in mind that pulling the two apart meant that I was disconnecting the Kangaroo from its input devices (keyboard and mouse), HDMI output, and even its power source. 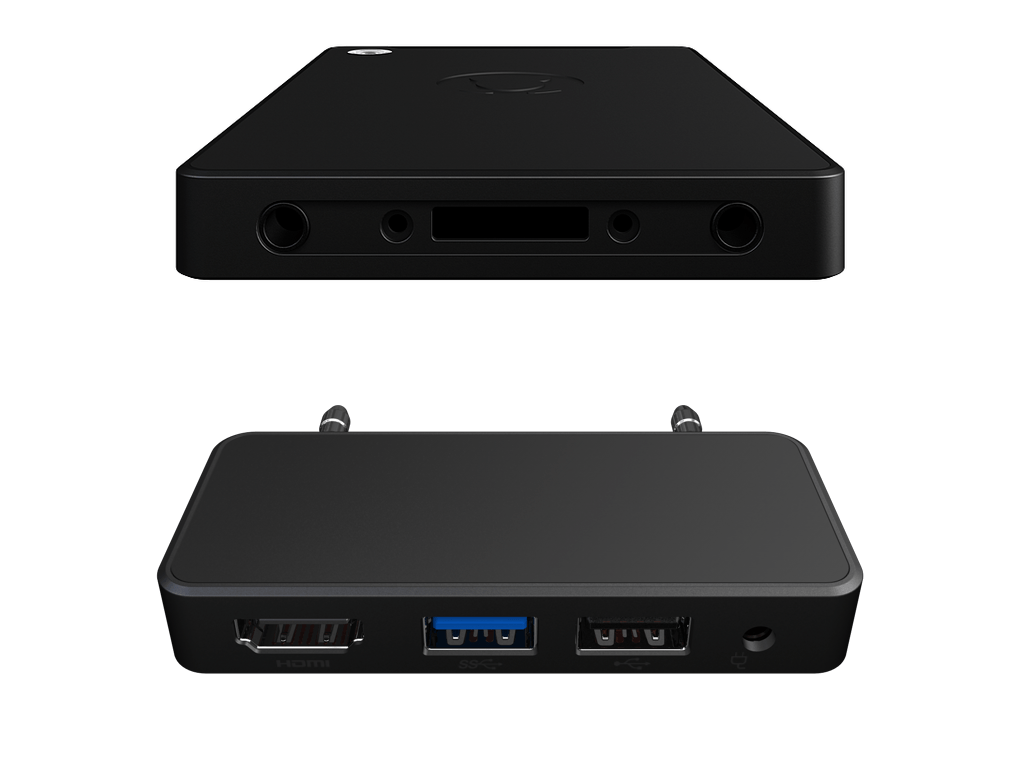 And yet, when I put the two back together a few seconds later, the Kangaroo was right where I left it, showing the OS and apps in the same state, as if nothing had happened. There was no error, no reboot required, and all the devices (monitor, mouse, and keyboard) worked without having to be unplugged and plugged back in.

The included Dock is supposed to let you connect the Kangaroo to PC monitors, big screen TVs, projectors, or even Apple’s iPad. The Kangaroo can even provide remote access via a hardware Action Switch, allowing you to gain entry to the Windows 10 desktop even when there is no Wi-Fi.

The design is sleek, though I did find it particularly interesting that the power supply connects to the Dock. I would have preferred if that port was on the Kangaroo itself, but I guess this way, you can have multiple power cords in all the places you use the device. Leave one power cord and dock at work, and another pair at home — with the monitor, power, and input devices all plugged in — so you really only need to carry around the Kangaroo itself. 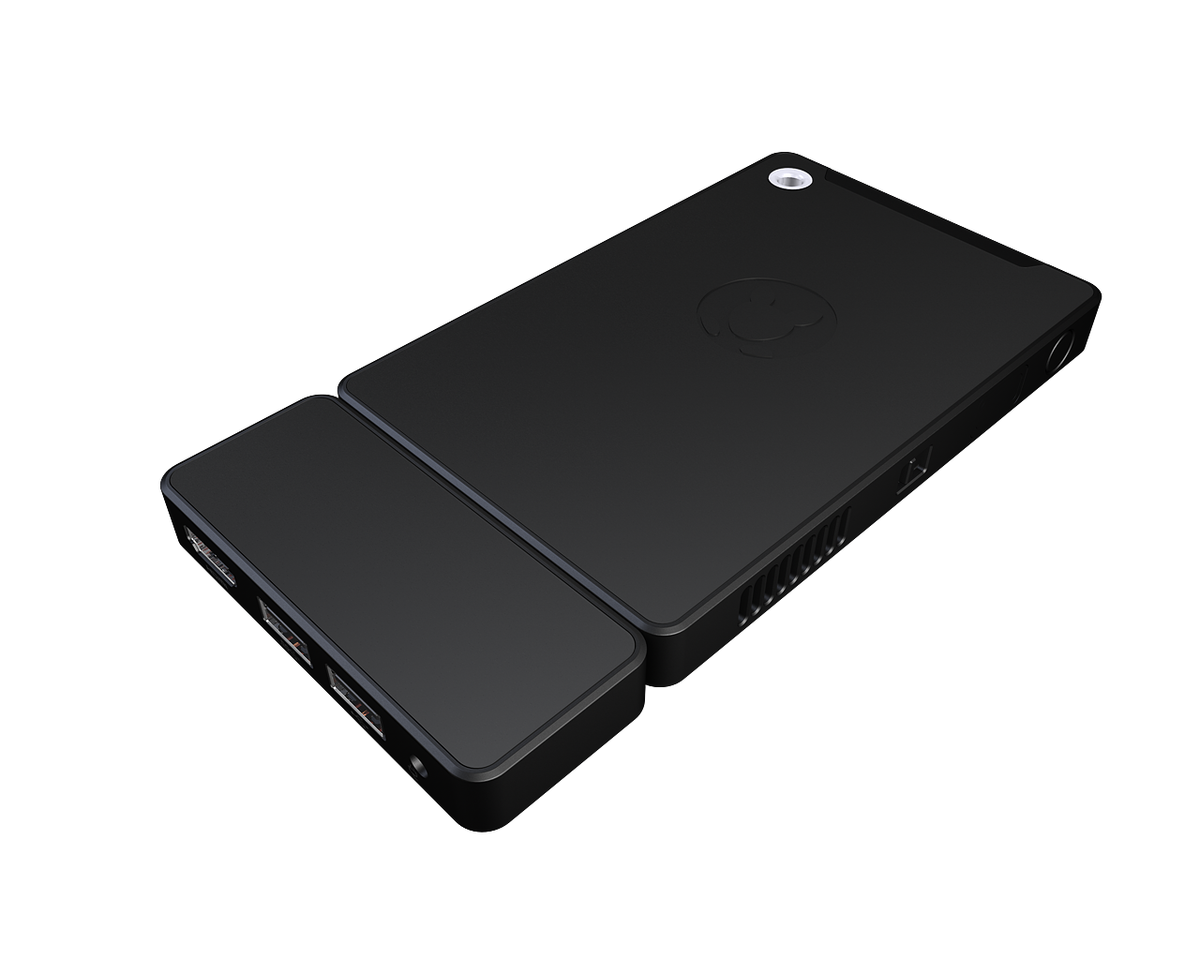 “Kangaroo is the first product to allow you to use the same PC for all applications, in any environment,” Lawrence Yen, director of Kangaroo product marketing, said in a statement. “Unlike stick PCs and other pocket PCs, Kangaroo works with all of your existing devices and can be docked at home or tossed in your bag to use anywhere, powering and providing Windows 10 access on the go. You can access any file, any time without worrying about access to a network, upload and download times or file corruption. With its power, capacity and features, Kangaroo will change the definition of mobile computing.”

Of course, “all of your existing devices” is a lie. You can’t simply plug the Kangaroo into any screen. If you have a TV, monitor, or projector that was bought in the past few years, though, you should be fine.

Kangaroo has support from both Microsoft and Intel (their logos are on the box), which is no small achievement. “Innovative solutions such as the InFocus Kangaroo built on Windows 10 delivers great flexibility at a reasonable price, helping customers to be even more productive while on the go,” Peter Han, Microsoft’s vice president of worldwide OEM marketing, said in a statement.

Think of the Kangaroo as a step before Microsoft’s Continuum for phones. Next month, we’ll have Windows 10 phones that can be attached to a Display Dock and work exactly like a PC. In the meantime, or if you don’t want to spend hundreds of dollars on such a phone, the Kangaroo will do. 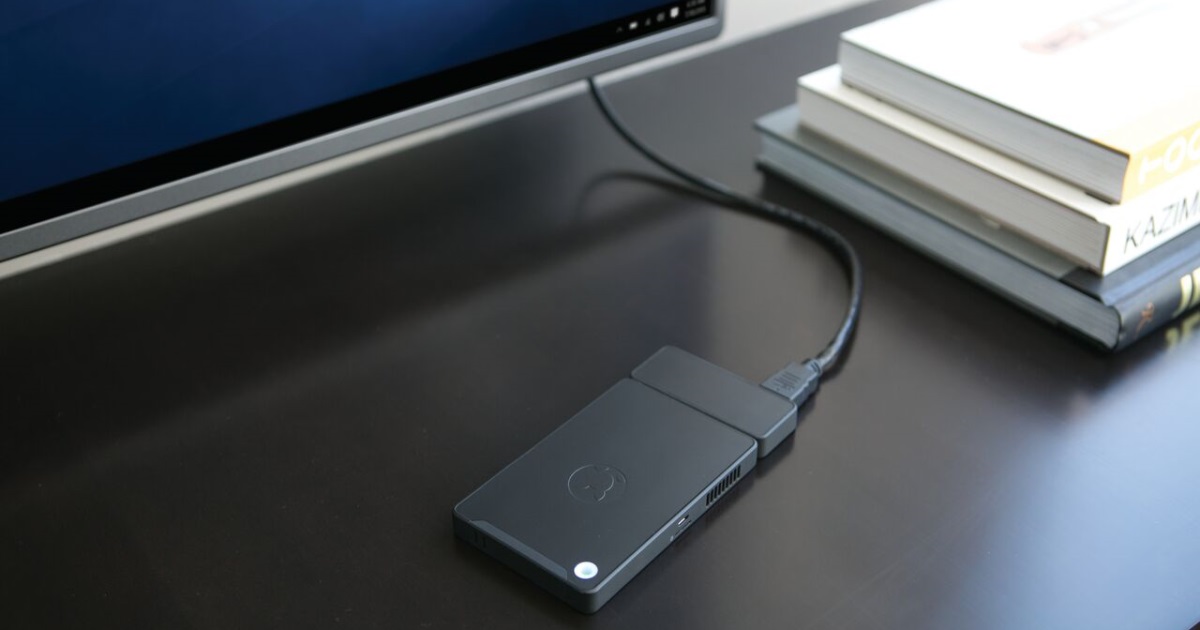 The built-in battery and ports are the real differentiators here, especially when compared to your typical stick PC. If you’re considering a stick PC, I can definitely recommend paying the extra money to get the Kangaroo.

Aside from slow Wi-Fi in some cases and some cropping issues depending on the type of screen you’re plugging the Kangaroo into, this is definitely worth the $99. InFocus plans to unveil more products and accessories at CES 2016 in an attempt to build a Kangaroo ecosystem: A Kangaroo monitor, dedicated storage expansion, and various port expansion docks are all in the works.

Given its price point, we suspect the Kangaroo’s success will depend entirely on whether consumers are interested not just in the mobile desktop, but all its various expandable options and accessories.