Paul English, former CTO and cofounder of the travel website Kayak, is today launching an iOS travel app called Lola, which is backed by a $19.7 million investment. English promises to reinvent the high-touch personalization offered by travel agencies and marry it to modern mobile messaging tools. This is particularly interesting considering that his previous company, Kayak, has dominated the DIY travel space over the past ten or so years and played a part in killing traditional travel agencies.

“What we’re doing now with Lola is we’re not bringing back the old school travel agent, ” he explained “We’re trying to reinvent the travel agency. I have engineers, twenty people on the product team, fifteen travel agents, and ten overhead people like me and the designers. I have five people on the AI team.”

English also previously founded Blade, a Boston-based accelerator, or “foundry,” as he calls it — aimed at launching a small number of startups. That was also a $20 million outfit, backed by Accel Partners and General Catalyst Partners. “We’ve been working on this since July,” English told me in an interview. “The origin of the idea was originally my cofounder [Bill O’Donnell] and I wanted to create an app to help you manage things, a remote assistant —  like Zirtual,” (Incidentally, Zirtual is a startup that laid off its staff of 400 employees over email with no warning.)

“One of our investors said, ‘This sounds like a good idea, but do it just for travel.’ Duh, why didn’t I think about that?” And as it turns out, the travel business is way bigger than you’d guess, especially online, according to English: about 8 percent of the U.S. GDP and about 40 percent of all ecommerce, when you count the dollars. 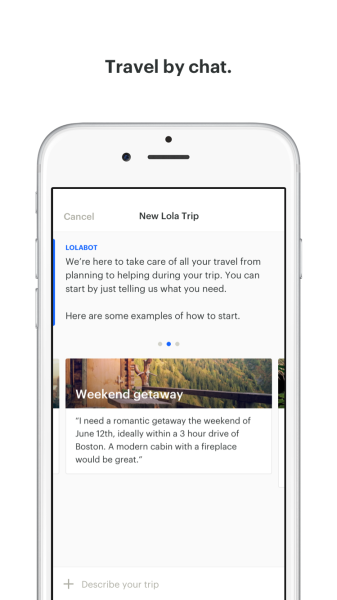 Of course, Lola isn’t just a concierge service for travelers. There’s an AI contingent involved — which the company is calling “Harrison.” English says it has something to do with the company name. I couldn’t figure it out. Can you?

Some of the AI-driven features are still to be announced, but the expectation is something along the lines of automating predictable behaviors in travel so that information can be accessed quickly (flight changes, for instance), enabling agents to focus on providing exceptional customer service. “It’s going to be some time before AI can take the majority of requests,” he said.  “AI will do simple things to start — what’s the next flight to New York, what time is my flight taking off, etc.”

English is what I’d call an “AI-realist.” Most successful bots are actually scripted NLP-based bots — meaning they’re “reading” text to predict the next thing to say, as opposed to having an ongoing machine learning component. This being the case, it’s impossible to get the confidence threshold high enough for a major brand like American Airlines or Marriott to feel confident having their image stewarded by a machine. I recently learned that something like fifteen percent of all Google searches every day are brand-new. That goes to show you the limitations of language as an interface for discovery and the challenges involved.

English said his team did an experiment in which they asked their travel consultants to suggest a phone call to beta customers. In two weeks of testing, only one user asked for a phone call. “People like living in an asynchronous world,” he concluded. And English knows a thing or two about customer service. He’s famous for having had a big red phone on his desk at Kayak, with the number listed on Kayak contact pages. His programmers all handled customer service directly.

The plan is to hire around one hundred agents to begin with, while still keeping the service relatively exclusive for now. There may be a fee structure after the launch, as well. “It is ‘invite only’, given that I only have fifteen travel consultants — if I have fifty thousand people download the app, I can’t handle that,” English said.