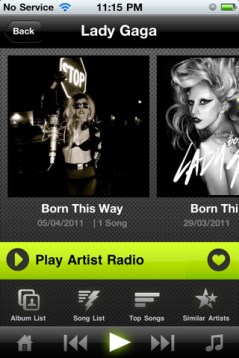 Not to be forgotten in the wake of popular subscription music services like Spotify and Rdio, the revamped (and legal) Kazaa has now launched its own iPhone app.

Kazaa — which was infamous as a peer-to-peer network before it was shut down in 2006 and forced to pay a $100 million settlement to record labels — was brought back to life as a music subscription service in 2009 by the media company Atrinsic. The company clearly has a lot to prove given that it’s standing in the shadow of  its more hyped competitors, but judging from its uninspired iPhone app, I don’t think there’s much of a future left for Kazaa.

The app lets subscribers of Kazaa’s $9.99 a month unlimited music service stream millions of songs and synchronize them for offline listening. You can create and share playlists, as well as keep an eye on hot music topping the charts. Basically, Kazaa’s app does everything that apps from Spotify, Rdio and Mog do, but it doesn’t have anything to differentiate it from the pack.

Unless Kazaa comes up with some compelling hook with its music service, the company will have a hard time surviving against the rising popularity of its competitors. Spotify also offers free ad-supported access to music, something that both Rdio and Mog are planning to do as well. If Kazaa can barely compete with other paid services, it can’t possibly take on free offerings.

Kazaa’s service is only accessible in the US, and the app isn’t yet optimized for use on the iPad. The company says support for more devices is in the works, according to Reuters.