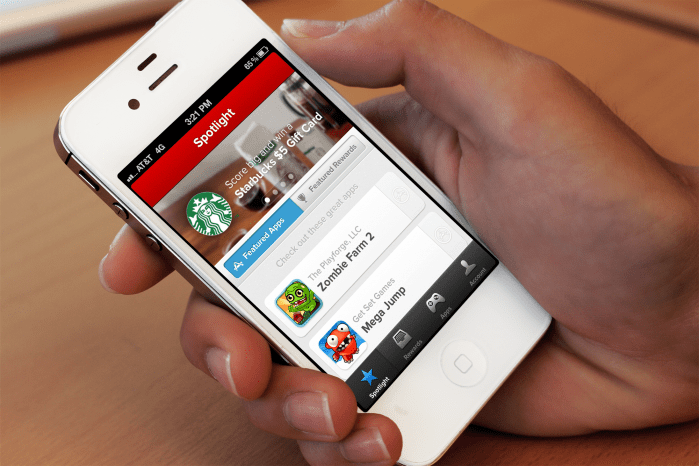 Kiip released its own app today, charmingly called “Kiipsake,” which acts as a digital wallet where people can store all their Kiip rewards.

Kiip is a mobile network that delivers rewards for achievements that occur within games and apps. This hot startup recently raised $11 million in venture capital and has gained major traction, providing over “100 million moments of happiness” a month. It’s part of a growing number of companies focused on “gamification,” or adding game-like incentives to ordinary activities. While that sounds rather Pavlovian, gamification can be effective for marketers, and Kiip is betting that it can be effective in improving your real life, too.

The idea behind Kiip is simple: users unlock tangible rewards when playing a game or engaging with an app, such as fitness app Map My Run. Rewards range from American Apparel gift cards to Propel fitness water. Before, they were redeemable on an individual basis through email; now, people can redeem their rewards through the Kiipsake app.

What initially started as a game-specific rewards system has expanded to embody the idea of “rewards for everyday life.” Along with the greater potential to earn rewards comes a greater need to manage them. For those high-achieving (or just tuned-in) users who regularly unlock rewards, Kiipsake will be a simple way to organize, track, and redeem them.

“People have different collecting habits and the billion dollar question is getting the right reward to the right person at the right time,” said CEO Brian Wong in an interview with VentureBeat. “We have made sure the user experience is gorgeous because brands pay to be a part of happy moments and we want to ensure the rewards are something consumers actually want.”

In addition to consolidation, Kiipsake will also include a catalog of all Kiip-enabled games and apps, so enterprising (or thrifty) consumers can view the whole scope of reward possibilities. Furthermore, it will provide greater visibility for Kiip’s brand partners and make redeeming the rewards even easier.

Kiip was founded in September 2010 and is based in San Francisco with sales offices in Chicago, LA, New York, and London. The company has raised $15.3 million to date in two major rounds of funding as well as a previous seed round. The team currently consists of 30 people, but is scaling quickly. Along with the size of the team, Wong promises innovation will continue to grow as well.