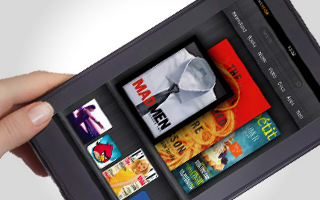 Amazon is expected to sell as many as 5 million of its new Kindle Fire tablets before the end of 2011.

JPMorgan analyst Douglas Anmuth stated in a research note he thinks the e-commerce company can move 5 million of the Android-based units during Q4.

The 7-inch color, touchscreen, email-fetching, app-running, web-browsing gadget sells for $199, making it the perfect downmarket competitor to the iPad 2, which starts at $499.

And for gift-giving holiday shoppers, the Fire and its ilk (such as the Kobo Vox and Nook Color) represent a great compromise between flashy functionality and recession-friendly pricing.

The highly anticipated Fire will be available for sale starting November 15. On the day of the Kindle Fire announcement, Amazon took 95,000 pre-orders for the gadget. The Nook Color is on sale now. Kobo will start shipping Vox units later this week.

For contrast, Apple sold around 4.7 million iPad units in the second quarter, when its iPad 2 launched. The company stated it was selling the units as fast as it could make them.

While the Fire is more consumer-friendly in its pricing, it also faces more competition in its vertical and price range than does the iPad. Between the Nook and Kobo competing products, the new breed of color, touchscreen e-readers are mighty similar to tablets in their functionality, and it would be difficult to say which of the three is best in class.