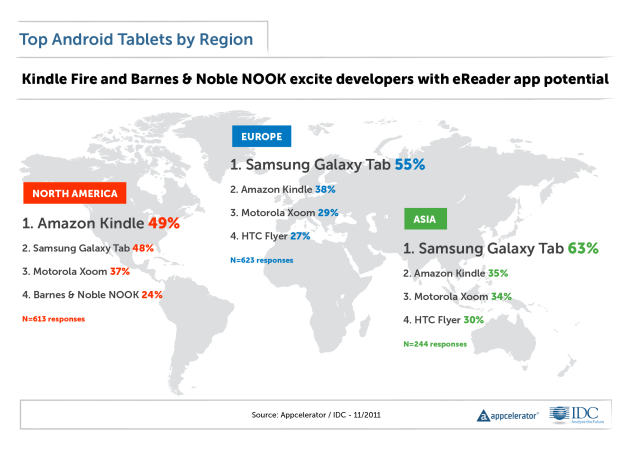 Speaking volumes about the sorry state of Android tablets, North American developers are far more interested in Amazon’s Kindle Fire than any other Android slate, according to a survey by mobile app framework company Appcelerator.

Out of a survey of 2,160 developers using Appcelerator’s Titanium framework, 49 percent in North America chose the Kindle Fire as their preferred Android tablet. North American developers are also twice as interested in the Kindle Fire than they are in Barnes & Noble’s Nook Color — even though it was effectively the first inexpensive Android tablet. (This survey likely didn’t take into account news of the new Nook Tablet, announced last week.)

The early interest is obviously a good sign for Amazon, and it tells us that the Kindle Fire is set to be a hit with developers, just as it is poised to be with consumers. Appcelerator notes that interest in the Kindle Fire is only slightly less than what developers had for the iPad before its release (53 percent in April 2010).

Worldwide, the Kindle Fire ranks second place, with 43 percent of developer interest, right behind Samsung’s Galaxy Tab. Developers rank the Kindle Fire’s low $199 price as the primary reason for their interest, with Amazon’s content library as a close secondary interest.

But just like with all Android devices these days, developers are most worried about fragmentation with the platform — especially since Amazon’s spin on Android looks completely different than any other take. The Kindle Fire will be able to run typical Android applications, but they’ll first need to be approved by Amazon.

Appcelerator also points out that developers are now much more interested about Microsoft’s Windows Phone platform. The big reason, not surprisingly, is Microsoft’s partnership with Nokia to create flagship Windows Phones. 38 percent of developers surveyed said they were “very interested” in the platform, ranking it as a solid third place behind Android and iOS. (This echoes sentiments I’ve been hearing more and more from developers — Microsoft’s developer outreach has clearly paid off.)