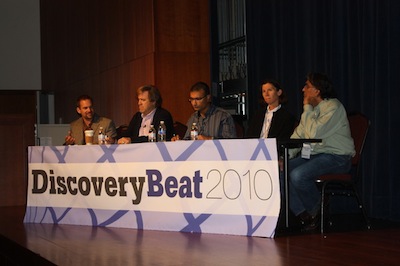 Bing Gordon, who has invested in hot gaming companies like Zynga and just-acquired Ngmoco, said today that for app developers, just getting discovered is overrated. What’s important, he said, is making sure users keep coming back.

Gordon is a former Electronic Arts executive and now a partner at Kleiner Perkins Caufield & Byers. He spoke this morning at VentureBeat’s DiscoveryBeat conference in San Francisco, and said that discovery has a “constrained” value, while retention is getting much more important. A developer’s job is not just to get a first date, not just to get a second date, but to get to an anniversary. That’s why Gordon said he looks closely at metrics like daily active users (DAUs) and DAUs as a percentage of monthly active users.

“This is the most promiscuous app audience in the history of mankind,” Gordon said.

Not all of the panelists agreed. YouWeb founder Peter Relan said that while DAUs are an important measurement for many apps, there are other apps that can build a loyal audience even if those users don’t come back every day — he compared them to 60 Minutes viewers on television. In the mobile world, that might include applications like Yelp, Pandora, Netflix, and Google Maps, which users might visit only once every few days but which are still powerful, popular apps.

For what it’s worth, I didn’t hear any data backing up the idea that these apps don’t have high DAU numbers — it seemed like they were cited as anecdotal examples. And Relan acknowledged that these “60 Minutes”-style apps seemed to have built a Web audience first, rather than taking off on mobile platforms first. So basically, for companies focusing on mobile first, Gordon’s comments seemed to be correct.

Oh, and since the conference is focused on discovery, Gordon did have some advice on that front: He advised developers to pay attention to the packaging (namely, the icon) and the name of their company. Back in Gordon’s days at EA, he said packaging could increase a game’s popularity by 10 times. And with names, Gordon said developers should imagine fifth graders are passing their names along on the playground.