A new report from OpenSignal shines a light on the state of mobile networks around the world, using billions of crowdsourced readings from the OpenSignal app in 95 countries.

For the uninitiated, OpenSignal passively monitors the speed, coverage, and reliability of mobile networks on users’ phones (Android and iPhone). With more than 10 million downloads globally, it provides crowdsourced data that offers an alternative view of mobile networks and their performance in different areas. The company has been producing 4G network reports for some time, and its data has also been used to illustrate fragmentation within the Android ecosystem. But this is its first report to take a more holistical look at the global state of mobile networks.

“The Global State of Mobile Networks (August 2016)” looks at data from more than 800,000 users, collected between May 1 and July 23, 2016, and tracks the availability of 3G signal (or better), measuring the time it takes for users to connect to networks. It also monitors network speed, tracking the actual 3G and 4G speeds experienced in each country. Additionally, it looks at the amount of time people spend on Wi-Fi compared to mobile internet.

The report reveals that 3G is pretty widespread, with 93 of the 95 countries sampled enjoying 3G signal or better more than half the time, and the overwhelming majority experiencing 3G connectivity more than 75 percent of the time. The usual suspects dominate the top of the table, including South Korea, Japan, Israel, Singapore, and Finland, which all enjoy 3G or better availability more than 93 percent of the time. The U.S. doesn’t fare too badly, coming in at 17th with 91.69 percent.

Above: 3G or Better

Coverage is one thing — speed is something completely different. Though 3G and 4G are fairly widespread in many countries, looking at overall mobile internet speeds on a country-to-country basis reveals some staggering disparities.

South Korea, usually near the top of anything related to internet speed / coverage, had the fastest overall speed, clocking in at 41.34 Mbps, while the slowest average revealed by OpenSignal data was in Afghanistan, at 2.2Mbps. The U.S. just managed to scrape into the top 40, notching up average mobile internet speeds of 12.34Mbps — substantially faster than Afghanistan, but languishing behind Hungary (26.15Mbps), Lithuania (21.47Mbps), and China (17.95Mbps). 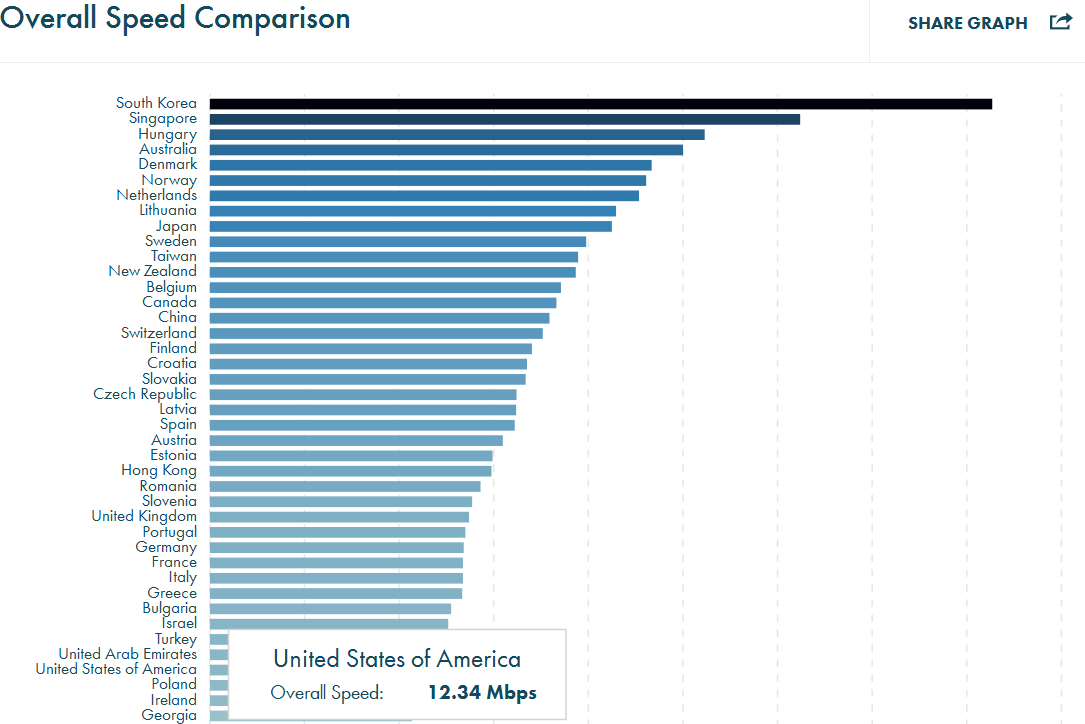 Perhaps less surprising, Wi-Fi proved the most dominant connection type on phones tracked by OpenSignal, and there appears to be some correlation between mobile internet coverage / speed, and Wi-Fi uptake. For example, Trinidad and Tobago and Bosnia and Herzegovina are at the bottom end of the mobile internet coverage / speed graphs, but are in the top five for time spent on Wi-Fi. 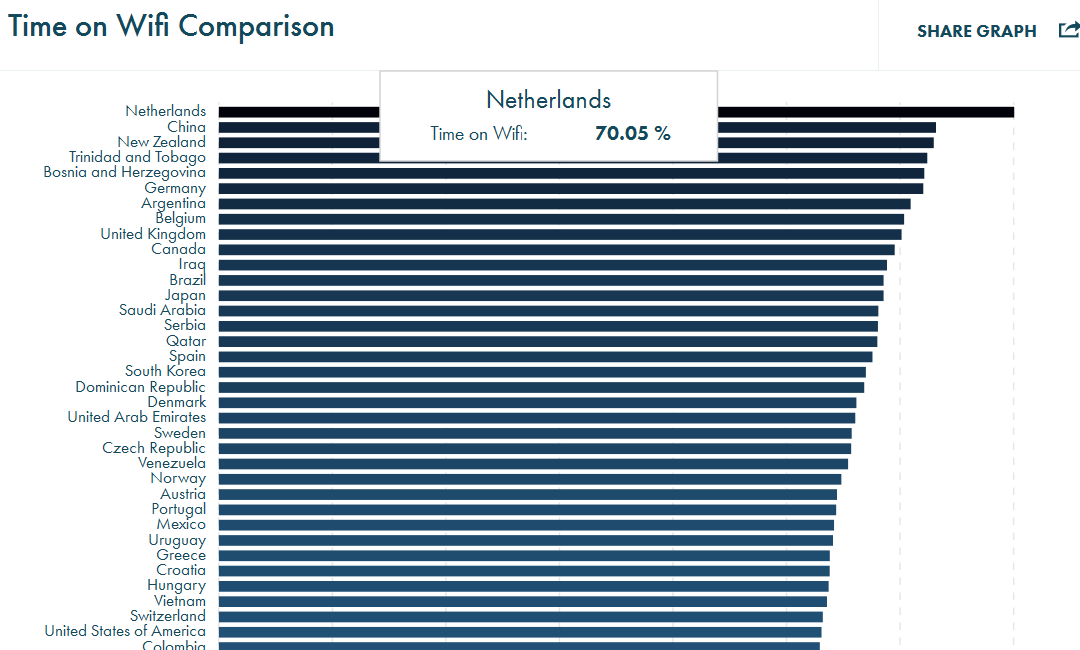 Above: Time on -Wi-Fi

For some reason, the Netherlands comes out on top in terms of Wi-Fi usage, with users connected to Wi-Fi more than 70 percent of time. That could well be because the Netherlands has a pretty good public Wi-Fi infrastructure. By contrast, U.S. users spent just over half their connectivity time on Wi-Fi.

At any rate, the new OpenSignal report makes for an interesting read and provides good insight into the global state-of-play within mobile internet coverage.