Video site Kyte has raised another $6.1 million in venture funding to push forward with a new broadcasting platform. Although anyone can use it, the platform seems targeted at big media companies, and Kyte says it’s already partnered with four major music labels, as well as hip hop star 50 Cent.

Kyte chief executive Daniel Graf says that since he unveiled the product last year, a number of media companies have approached Kyte about partnerships. There’s certainly no shortage of livestreaming sites (our overview of the field), but Graf says Kyte stands out because you can upload videos with just one click and because you can embed its channels (which update in real-time, unlike most embedded videos) pretty much anywhere online, be it your own site or social networks like MySpace and Facebook. (In our previous coverage of Kyte, we said it “appears to do everything.”)

The company is also launching some new features today that make its platform even more flexible and attractive. Rather than uploading prerecorded videos, you can now send footage live from your phone to a Kyte channel. Graf downplays the importance of this new feature, saying that most users are more interested in prerecorded video, but this is still an innovation — other sites can livestream from a phone or from webcam, but Kyte is the first to do both. (See screenshot below, in which Graf broadcasts from a webcam while showing off the mobile phone he was broadcasting from earlier.) 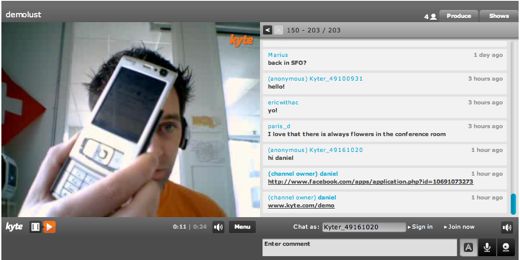 Kyte users can now also turn their video channels into a Facebook application in a few minutes.

There are already some complaints that the new site for Kyte’s video platform is too tough to navigate, and Graf acknowledges it could probably be improved. He also argues, however, that the site shouldn’t be a destination for most users — instead, they should be visiting the sites of its media partners. (You can also view a video demo of Kyte here.)

Graf says his long-term vision focuses more on partnerships with other companies than on the user-generated content at Kyte.tv. Kyte isn’t moving completely away from UGC, but more of it will be tied into a specific brand or partner, Graf says, such as fan videos for 50 Cent.