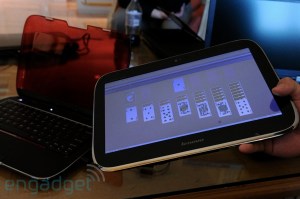 Computer maker Lenovo is planning for an Android tablet it’s calling “LePad” to compete with the iPad, and to match its recently released “LePhone” Android smartphone in China. The company is aiming to release the device by the end of the year, according to statements made by Liu Jun, senior vice president and president at Lenovo’s Consumer Business Group, PC World reports.

Liu Chuanzhi, Lenovo’s chairman and founder, recently said “we would be in trouble” if Apple focused more on the Chinese market. Lenovo is currently focusing its device efforts on China, where its business accounts for around 47 percent of its total sales. With its LePhone smartphone, the company is planning to work on building marketshare in China before it brings the device to other markets. We don’t yet know what its plans are for its LePad, but it’s likely that it will follow through with a similar strategy.

Apple products are still very expensive in China — even from gray-market retailers — so the company has something to gain by offering cheaper devices that are oriented towards the Chinese consumer. Apple will officially begin selling the iPad in Hong Kong this Friday, and it still doesn’t have any plans to bring it to mainland China.

The LePad is likely a retooling of the company’s previously announced U1 hybrid tablet/laptop, which — along with its Skylight operating system — was shelved in late May. Last month, the tablet was reportedly being revived with Qualcomm dual-core processors and Android.