Lenovo has a lot in store for CES this year, especially for fans of its ultraportables and tablets.

The PC maker announced the third version of its ThinkPad Carbon X1 tablet, which Lenovo claims is the world’s lightest 14-inch Ultrabook. It also introduced the new ThinkPad 8, a Windows 8 Pro tablet that looks like an 8-inch competitor to Microsoft’s Surface 2 Pro, as well as the Yoga 2, a new version of its popular convertible Windows 8 Ultrabook.

Much like its predecessors (and living up to its name), the new Carbon X1 is built out of carbon fiber, which is both lighter and stronger than typical laptop metal material. The 14-inch Carbon X1 weighs only 2.8 pounds, mostly thanks to that carbon case, while Apple’s 13-inch MacBook Air weighs closer to 3 pounds. (In the world of ultraportables, even a slight weight difference can be noticeable).

Like most new laptops being announced these days, the Carbon X1 gets a huge battery life boost thanks to Intel’s latest Haswell processors. Lenovo claims it gets around 9 hours of battery life, a 70 percent improvement over last year’s model. In comparison, Apple rates its new MacBook Air 13-inch at around 12 hours of battery life. The Carbon X1 includes one option Apple doesn’t give you though: built-in 4G LTE connectivity.

The new ThinkPad X1 Carbon starts at $1,299 and will be available in late January. 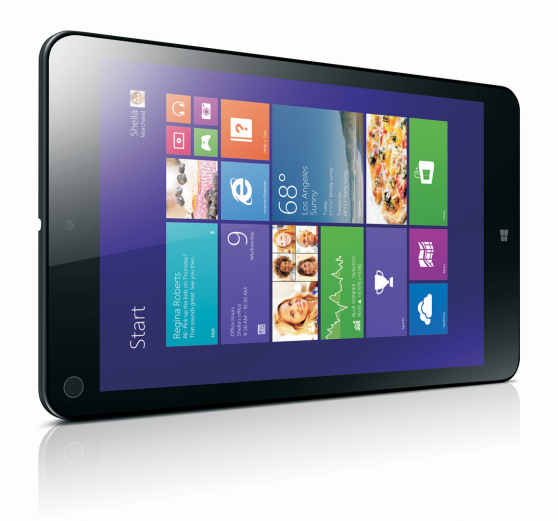 With the ThinkPad 8, Lenovo is entering Surface Pro 2 territory — a hybrid Windows 8 tablet with tons of power behind it, and compatibility with old Windows apps — but at the size of Apple’s iPad Mini. The 8-inch tablet sports a sharp 1080p display (lower than the iPad Mini), a quad-core Intel Bay Trail processor, and compatibility with keyboard base, which effectively makes it a powerful laptop.

You can also dock the ThinkPad 8 with Lenovo’s new OneLink Pro Dock for a more desktop-like experience.

While I’m all for Microsoft’s mission of delivering truly hybrid computers, its Surface lineup has always been a bit too bulky to be used solely as tablets (especially the Pro models). The ThinkPad 8 could be a decent solution for those who want to spend more time with their computer as a tablet, rather than as a laptop.

The ThinkPad 8 will be available in late January, and starts at $399. If you’re looking for something larger than the ThinkPad 2, Lenovo’s new MIIX 2 models might fit the bill. Available in 10-inch and 11-inch variants, the MIIX 2 devices sport a detachable screen, as well as a keyboard dock for a traditional laptop experience. You can also rotate the screen on the keyboard base, similar to Lenovo’s Yoga and Flex line, to use the base as a stand.

The 10-inch MIIX 2 focuses on ultra-portability, weighing in 1.3 pounds (typical for most 10-inch tablets). It sports a quad-core Intel Atom processor and a 1080p screen. The 11-inch version gets you a much faster Intel Core i5 processor, and it will likely weigh a bit more (Lenovo didn’t offer any specifics).

Lenovo is also updating its new convertible Windows 8 laptop line with the Yoga 2, a cheaper version of its revamped Yoga 2 Pro, which it introduced back in September. It comes in two models, an 11-inch and 13-inch version, and sports all three of Lenovo’s “Yoga” moves: A laptop mode, a stand mode (which involves flipping the screen around so that the keyboard is behind it), and a tent mode (in which you stand the tablet up on the edges of its screen and keyboard in a pyramid formation).

The company’s consumer laptop line is also getting refreshed, with new performance-oriented Y40 and Y50 laptops, as well as new media-focused Z40 and Z50 laptops. Both laptop lines are split up into 14-inch and 15.6-inch models, with the Y-series (starting at $999, available in May) sporting much better hardware and a touchscreen option. The Z-series laptops start at just $599 and will be available in March.

Now for the truly weird stuff: Lenovo also announced an Android all-in-one desktop, the N308, which sports a 19.5-inch touchscreen and starts at $450. I have no idea who this one’s meant for — it seems too hard to manage for a kiosk, and not cheap enough to serve as a simple desktop for kids.

Lenovo also unveiled a network storage device, the Beacon ($199), which is meant to be a “personal cloud” device for synchronizing files across your computers, smartphones, and TV. The Beacon can transfer files over Wi-Fi, 3G (with a data plan), and Ethernet.

Following up on last year’s giant 27-inch touchscreen Horizon PC, Lenovo also announced a slimmer and lighter model. The Horizon 2 is just 19.5 millimeters thick, or about the size of a pack of playing cards. It will be available in June for $1,499.