Lenovo grabbed headlines last August by briefly stating that it was debuting “the world’s first 5G mobile phone,” a claim it deleted just before its subsidiary Motorola unveiled the Moto Z3 — a 4G phone with an optional 5G backpack. Now the company is teasing a fully 5G flagship smartphone called the Lenovo Z6 Pro, focusing on two key features: the ability to play back and record ultra-high-bitrate Hyper Video content.

In a live presentation at the 2019 Mobile World Congress (recorded by Notebook Italia), Lenovo Phone VP Edward Chang suggested that 4G smartphones were in the process of dying, and that the 5G era would be marked by a transition to “hyper video” phones — the next logical progression following 1G voice, 2G text, 3G image, and 4G video capabilities. Without fully explaining what “hyper video” entailed, Chang said that 4G videos were transferred at 100Mb to 1Gb network rates, while 5G hyper videos will be transmitted at 10Gb-plus rates.

The Lenovo Z6 Pro, he suggested, would be ready for the next big jump in camera technologies. After pointing at Nokia’s announcement of a phone with five rear cameras, and an unnamed 100-megapixel smart phone set to debut later this year, Chang said that Apple and other companies have been focused on structured light and time of flight 3D technologies. “Beyond that,” he asked, “what type of new technologies can make the smartphone look at the world as you see the world?” 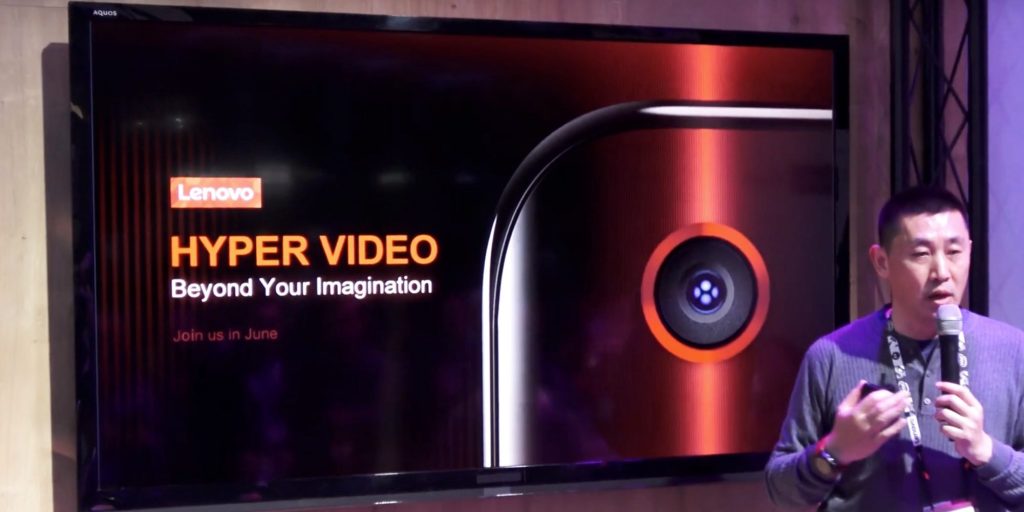 Without offering a concrete answer to that question, he said that Lenovo had been working on a Hyper Video camera for the Z6 Pro that will debut in June, at least for the Chinese market with China Unicom. Presumably, the camera will be capable of the sort of high-bandwidth recording discussed earlier — data that might be used for anything from 8K-resolution videos to stereoscopic VR or volumetric/holographic recording.

Based on Chang’s reference to going “beyond” five cameras, one ultra-high resolution camera, and prior 3D camera solutions, there’s a reasonable likelihood that the goal is some form of high-bandwidth stereoscopic display and recording solution, as that’s how people see the world. The word “beyond” probably doesn’t mean the Z6 Pro will actually record photos or videos at over 100-megapixel resolutions, but that its aggregate capabilities will be a step beyond added pixels.

It remains to be seen how such videos would be encoded and stored, though it’s worth noting that the latest Qualcomm Snapdragon 855 processors used in Lenovo phones are capable of simultaneously recording videos from two cameras at once and storing them together in a single HEVC file. The Snapdragon’s new Spectra 380 ISP supports twin videos at up to 22 megapixel resolutions at 30 frames per second. Stereoscopic videos might be displayed in a VR headset, or perhaps a glasses-free 3D screen akin to the Red Hydrogen One or Nintendo 3DS.

Lenovo has a history of leaking details ahead of its official announcements, so there may be more news on Hyper Videos before the event in June. Until then, let the speculation commence.