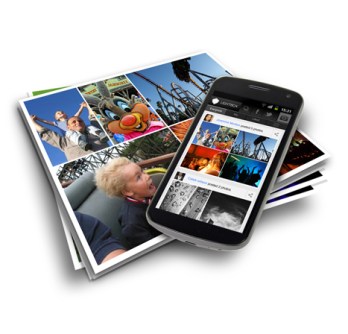 Many Android smartphone owners are eagerly awaiting the chance to use the hot photo sharing app Instagram currently only offers on Apple phones. But Instagram’s Android-only competitor Lightbox is debuting a new photo journal feature today that may make some iOS Instagram users jealous.

Lightbox’s original app let you instantly snap, enhance, and automatically upload photos to the Lightbox website and other services. The company’s new photo journal feature — accessible through the new version 2.0 Lightbox app launching today — takes that a step further by automatically grouping together photos in a personal timeline.

So, for example, you won’t need to worry about tagging or sorting all the photos you took during a friend’s birthday party — Lightbox will automatically do that for you, leaving you free to enjoy the party. The resulting photo journal vaguely resembles something you’d see from popular blogging service Tumblr. Even more like Tumblr (and Twitter), Lightbox now allows you to follow other users’ photo journals and vice versa.

Lightbox’s photo journals can be made entirely public, private, or unlisted (accessible only by visiting a specific link). Check out William Shepherd and Koneko Darling’s Lightbox pages for examples.

The feature gives Lightbox a major advantage over Instagram, which is only available on the iPhone at the moment and which goes to great lengths to keep its network locked down on its mobile app. Individual photos uploaded through Instagram can be viewed on the web, but it’s difficult to do seemingly simple things outside of the app, like view all of the photos from a single user. (Third-party services like Webstagram make this possible with Instagram.)

PicPlz, a competing photo sharing app available on both Apple’s iOS and Android, lets you easily explore photos from its users, but it lacks the automatic organization of Lightbox’s photo journals.

Lightbox is also launching a new HTML5 mobile site, which is accessible via the iPhone and other smartphones. You can’t upload photos via the mobile sites, which means iOS users will still need to hold out for a Lightbox app of their own. But the iOS version of the app is less than six months away, Thai Tran, Lightbox co-founder and CEO, tells VentureBeat.

Lightbox launched on Android in June and is approaching 1 million downloads, Tran tells VentureBeat. In comparison, PicPlz, which launched a year and a half ago, has somewhere between 1 to 5 million downloads, according to the Android Market. Lightbox is also around 10 times as popular on Android as Path, which started out as a photo sharing app for your closest friends.

London-based Lightbox has raised $1.2 million so far from Index Ventures, Accell Partners, SV Angel, and others.