Mobile messaging giant Line is launching a new “Lite” version of its service globally, following a limited rollout back in June.

The Japan-based company rose to prominence as a WhatsApp-style messaging app back in 2011, but the company operates across multiple verticals, serving up games and camera apps, mobile payments and even an Uber-esque e-taxi service.

Line claims north of 200 million monthly active users (MAU) in more than 200 countries for its messaging app alone, but the majority of these exist across just a handful of countries in Asia. In its quest to target more markets, however, it’s continuing to expand its offerings — and it seems rolling out a Lite version of its app fits in with these plans.

The aptly titled Line Lite app is available only for Android at the moment, and there’s no indication that one will be arriving any time soon for iOS. 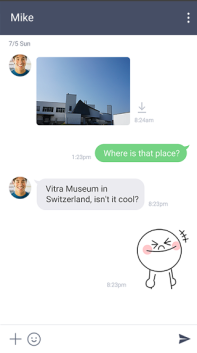 Weighing in at less than 1MB, Line Lite is designed to bring the core features of the main Line app (e.g. texts and stickers) to markets where networks may be slower or smartphones less powerful. Indeed, Line claims the Lite version installs in one-twentieth of the time it takes for the main app, and it omits features such as audio and video calls.

While it launched in just 11 markets initially — mainly across Asia and Africa — today’s news brings the new stripped-down version of the app to most markets, “except for a few specific regions.”

“A strong demand for LINE Lite has led to a worldwide release of the mini version of Line,” the company says in a press release. “We’ll keep working to bring the fun and convenience of LINE to more users around the world!”

Line could be fighting a losing battle in its push to infiltrate more markets — in the West, the likes of Facebook, WhatsApp, Viber, and Telegram are already locking horns. And Line could well be late to the table in many emerging markets too, where WhatsApp and Facebook are also popular. Indeed, back in June, Facebook actually launched a Lite version of its app for emerging markets.