Japanese messaging app company Line, a subsidiary of South Korean search engine provider Naver, today started trading at $42 on the New York Stock Exchange (NYSE) under the symbol LN, after raising more than $1 billion in its initial public offering (IPO). The debut price is up 33 percent over the IPO price of $32.84.

Early signs had indicated that demand was strong for Line shares, as trades were up 15 percent on the IPO price on the gray market yesterday. But now we have a clearer idea of the level of investors’ excitement. 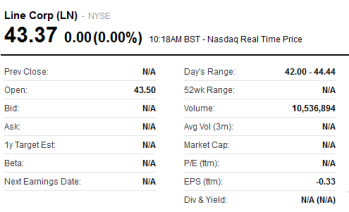 Above: Line on the NYSE this morning

People have been waiting for Line to appear on public markets for some time, and not only because it’s such a big deal compared with the other tech companies that have had IPOs so far in 2016, including Twilio.

Last year, the Wall Street Journal reported that Naver had postponed its IPO plans for the second year running. Then Line confirmed its dual-IPO plans last month, with the NYSE scheduled for July 14 (today), and the Tokyo Stock Exchange a day later.

Earlier this week, Line priced its IPO at the upper end of its range, with a view to raising $1.14 billion, which valued the company at around $7 billion. A total of 35 million shares are being made available — 22 million American Depository (ADR) on the NYSE, and 13 million shares on the Tokyo Stock Exchange. The company previously revealed that another five million shares would be made available if there was sufficient demand.

The rise of Line

Line was founded in 2000 as an online gaming company, with the Line messaging app arriving in 2011. The company is based in Tokyo’s Shibuya special ward and has 2,537 employees, as of March 31, according to the corporate prospectus.

Line registered a $2 million loss on $298 million in revenue in the first quarter of 2016. Much of the company’s revenue comes from Japan. Revenue sources include advertising and stickers, as well as more recent offerings, like the Line Pay Card.

Naver has held all of Line’s outstanding shares of stock until now. Post-IPO, Naver controls more than 83 percent of the outstanding shares. “As a result, Naver Corp. will continue to be able to influence or control matters requiring approval by our shareholders, including the election of directors and the approval of mergers, acquisitions or other extraordinary transactions,” Line said in its prospectus.

This year hasn’t been great for tech companies going public, but Twilio has been one of the big success stories so far. The Californian company started trading at around 60 percent above its IPO price back in June, a figure that has since risen to almost 200 percent over its $15 starting price.

The hope is that strong IPOs such as Twilio’s, and now Line’s, will encourage more tech companies to emerge from their shells and go public. But we’ll perhaps have a better idea of where things are at when the markets close today and as trading continues in the coming weeks.