LinkedIn plays a number of roles in the business realm, from professional networking platform to glorified CV database. But it’s also used by countless people who are proactively seeking new employment opportunities.

With that in mind, LinkedIn is today rolling out a new feature that tells prospective candidates what their commute time for a specific role would be before they even apply.

Research has previously shown that there is a strong link between a person’s commute time and their general happiness. In short, the longer you commute, the less content you are likely to be with life. And that does make sense — when your job is farther from your home, you’ll likely have to rise from bed earlier, return home later, and endure crammed subways or sit in traffic for longer.

This is why LinkedIn thinks its users will like the new commute preferences feature, which lets them input their starting point (presumably their home address), their preferred mode of travel, how long they’re willing to travel, and what time they’d like to start their commute. This data will be used to improve LinkedIn’s job recommendations, as well as limit search results to a jobseeker’s preferences. 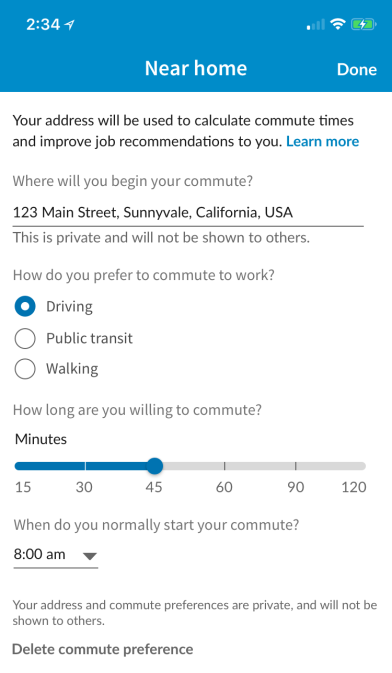 Within job descriptions themselves, users can see what their commute would be like based on various forms of transport.

LinkedIn has targeted the recruitment realm for years already and offers a standalone job search app, as well as a dedicated app for recruiters. A few months back, LinkedIn also rolled out a new feature that lets job seekers request a referral from someone they know at a company before applying for a role.

So recruitment plays a big part in LinkedIn’s business, and nifty little features such as commute-time calculators will likely prove helpful.