Microsoft Live Mesh, the software giant’s effort to link all of your electronic devices, is now open to anyone with a Windows Live ID.

Live Mesh was launched as an invite-only preview in April. At the time, I thought the early release sounded a bit underwhelming. It included some useful file synchronizing capabilities — allowing you to change a folder and have that folder update across all your devices, and also synchronize folders between friends — but it didn’t offer anything concrete about Live Mesh as a platform. It’s the platform that’s exciting, because it could lead to a bunch of cool applications that work online/offline across multiple devices. I don’t have a Windows Live ID (or, to be honest, many electronic devices), so I can’t see for myself how the service has improved. It sounds like it’s still basically a file syncing service, but more announcements are expected later this year. 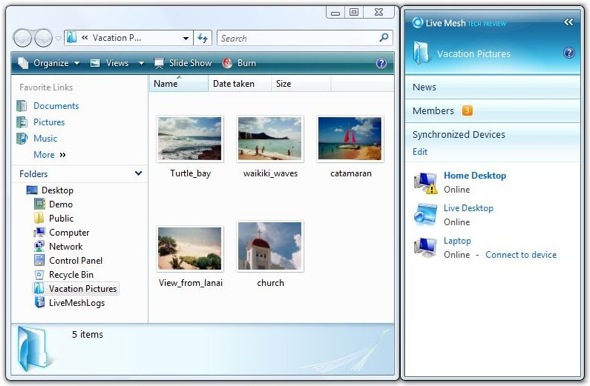 Microsoft has been rather quiet about openings its doors. LiveSide.net first reported the news, then pointed to a forum post providing confirmation. The Live Mesh blog has now been updated to spell out the changes, and it’s important to note that Microsoft hasn’t thrown open the doors completely. Instead, the company has doubled the upper limit of preview users, and allows you to sign-up at the Mesh Web site, rather than through Microsoft Connect. Until Microsoft hits that upper limit, Live Mesh will be open to almost anyone with a Windows Live ID. Interestingly, you can access the service if you’re outside the United States, but you have to trick it by changing your settings to pretend you’re in the U.S.

Why is Microsoft doing this now? There may be a ton of users begging to be let in, but Apple’s recent (and flawed) launch of its competing MobileMe service is probably related, too.