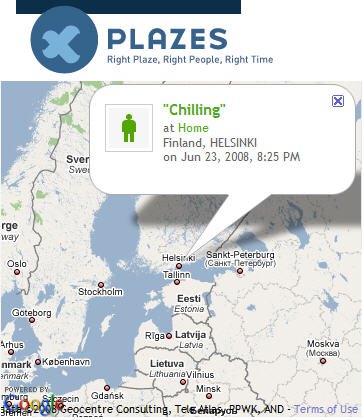 Nokia, the world’s largest maker of mobile phones, has agreed to acquire the Swiss-German start-up Plazes, the companies said in a statement today.

Plazes, based in Berlin, Germany is a service that lets you share your location and leave a brief message — akin to Twitter — about what you’re doing. Your message is placed on a map. In other words, it’s like Twitter, only with the added feature of location tags. Plazes’ most recent version actually integrates Twitter into its service entirely.

The move comes at a time when location-based services are all the rage.

The arrival of the iPhone and other devices using location (GPS) technology is spurring the development of numerous applications that exploit a user’s whereabouts to provide useful services. Various writers have recently opined at VentureBeat about location-based services (here and here). In fact, at this point, it may be over-hyped.

The acquisition is part of Nokia’s effort to bulk up on its social presence and time-based activity planning features, it said. It also is a sign that Nokia doesn’t want to cede too much ground on cool location applications to players such as Apple (Plazes had written an application for Apple’s iPhone recently), which has forged close ties with other similar services (location-based social network application Loopt was demonstrated during Apple CEO Steve Jobs’ keynote earlier this month). In 2006, Nokia also acquired Berlin’s Gate5 for a rumored $250 million, according to Techcrunch, and turned the product into Nokia Maps.

Another mobile social network, Zyb, was acquired by Vodafone recently for a rumored $48 million, or much more than the $25 million Zyb was seeking to be valued by investors when it was searching for a round of financing earlier this year. European investors had passed on Zyb at the time, reportedly doubtful about the promise of the LBS market. We’ve heard that Plazes was similarly under-appreciated until recently.

Nokia is building GPS into its newer handsets, so this make sense.

Carriers are getting active too. VentureBeat has learned that Verizon made a minority investment in both Loopt and popular GPS-based mobile phone navigation application, Networks in Motion.

Despite the Nokia deal, Plazes’ iPhone application is still said to be a go. It will be available in the iPhone App store when the iPhone 3G launches in July. Going forward however, one has to wonder if it’s in Nokia’s best interests to have a Plazes app on the iPhone. After all, Apple is positioning itself to be a major rival to Nokia with the worldwide launch of the iPhone in over 70 countries.

Other players in the social LBS arena include Brightkite and Whrrl. Who knows, Twitter may even get its act together and jump into the location game.

No financial details were disclosed on the Nokia-Plazes deal. Plazes raised about 3.7 million euros over two round.

[MG Siegler contributed to this article.]