Accessory maker Logitech today is announcing the launch of a new Create backlit keyboard case made specifically for the 9.7-inch iPad Pro.

It’s just like the Create keyboard case Logitech came out with for the original 12.9-inch iPad Pro, except it’s tailored to the size of the tablet’s younger, smaller sibling. The new version costs $130, $20 less than the Logitech keyboard for the original iPad Pro. 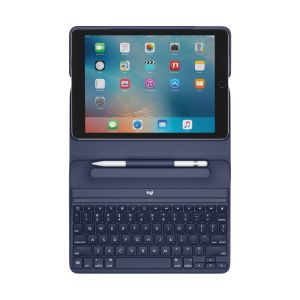 Above: The Logitech Create keyboard case for the 9.7-inch iPad Pro.

The new keyboard case hooks up to the iPad Pro’s three-dotted Smart Connector, so you don’t need to worry about charging it, and it includes a holder for the Apple Pencil, which Apple sells independent of the iPad Pro, according to a statement from Logitech. It even has hardware keys brightening and dimming the display and the keyboard, controlling music that’s playing, and locking the iPad.

With these features, the Logitech keyboard product may be more appealing than Apple’s own Smart Keyboard for the 9.7-inch iPad Pro, which costs $149. Griffin, Zagg, and other companies also offer keyboard cases that accommodate the tablet. Last month, Razer announced a mechanical keyboard for the 12.9-inch iPad Pro, but the company hasn’t announced plans to come out with a similar model for the smaller iPad Pro.

The Create is available now from both Apple and Logitech.