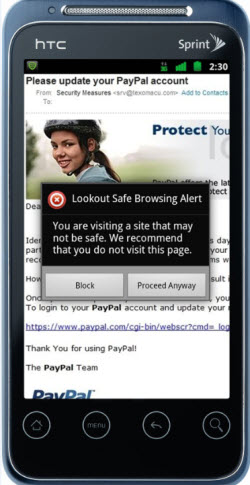 Lookout Mobile Security is launching an app that it says will make it safe to browse the web from a mobile device.

With the new Safe Browsing software, Lookout plans to help people more confidently surf the mobile web. The very fact that this app is necessary means that security threats on mobile are becoming worse and worse.

Lookout’s data shows that mobile users are more at risk, partly because they have traditionally trusted the information they access on their phones. Lookout says that mobile users accessing phishing sites (which try to trick you into revealing your personal data or passwords) are three times more likely to submit their login info than desktop users.

The Safe Browsing software lets users surf the web, send email, write text messages and enjoy social networking from their phones or tablets without worrying about malware and phishing attacks. The software automatically checks every web site you visit to prevent phishing attacks and malware from being installed on the device.

Drive-by malware — where malware is automatically downloaded to a user’s device just by visiting a corrupted web site — is becoming a lot more rampant on mobile. In the last six months alone, there were more than 100,000 phishing attacks targeting sites such as Facebook, banking sites, government agencies and donation web sites.

Some people are learning not to trust their phones. ComScore found in a survey that 33 percent of smartphone owners don’t access personal financial accounts on their phones because of mobile security risks. The point of the new Lookout protection is to restore that feeling that it’s safe to surf the web, said John Hering, chief executive of Lookout in San Francisco.

Lookout’s Mobile Threat Network already protects more than 9 million users from downloading or accessing bad apps. And now, using cloud-based technology, it will protect those users from phishing attacks and malware sites, without slowing down mobile browsing. If a user unknowingly clicks on a bad site, Safe Browsing will block access to the site automatically.

Safe Browsing is available as part of Lookout Premium, which is available for a subscription fee. Lookout is available on more than 400 networks in 170 countries. Lookout was founded in 2007 and recently raised $19.5 million.