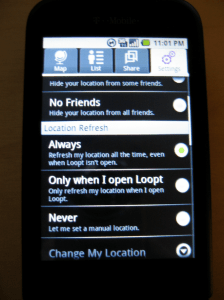 The location-based social network Loopt today launched its service in the Android Market. It reminds me a lot of the iPhone version of the service except for one major difference: The Android version can update your location even when the application itself isn’t open. Yes, it runs in the background.

That has been a major point of contention for iPhone owners. While Apple doesn’t allow third-party applications to run in the background, the more open Android platform does. The rationale behind not allowing such actions is both security and battery life, and Apple thinks it has a better way of accomplishing much of the same result with its Push Notification service that uses servers to ping your phone when an application that isn’t open wants to update.

Of course, Apple is already a couple months behind schedule on releasing Push Notification, and it’s unlikely to provide all the background task goodness that some programs will want. Programs like Loopt.

You see, Loopt with location background capabilities makes sense. Say you and all your friends signed up for it (which would probably be more likely if it had a cool differentiating feature like always-on location), if you chose, you could follow where everyone was at all times. Creepy? A bit — but imagine using it during a workday. Maybe you’re on lunch and you see that a friend is right around the corner from you. Or maybe you’re all out at night and see that everyone is near each other and decide to meet up.

It’s easy enough to turn off when you don’t want to use it, and would be really convenient to use when you did.

Without location, Loopt is just another social network that no one is going to use because they are already on several other social networks that they may or may not use to varying degrees. With quasi-location functionality, like what Loopt on the iPhone has, it’s interesting, but not enough to attract crowds of people to use it all the time. 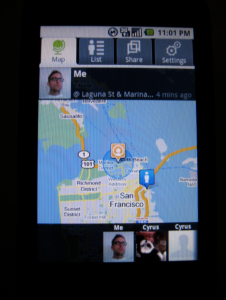 That’s why I’m betting that if Push Notification doesn’t provide the exact same features that background tasks do, Apple will eventually open up the iPhone to allow third-party apps to run in the background. There’s a whole market of services and applications out there waiting to pounce on what location has to offer, but without the current sexiest device on board, the iPhone, location’s potential cannot be reached.

It’s interesting that Loopt on Android leaves out the Mix feature. Mix allows you to share your profile information with strangers also using Loopt who are nearby you. To me, Mix almost seems as if its an apology note to iPhone users for location data not being able to be updated in the background. Because most people probably don’t have a lot of real friends who are using Loopt on the iPhone, it’s attempting to connect you with anyone out there who is.

Of course, Loopt is also available on over 100 other handsets across the wide spectrum of carriers. All of those put together is potentially powerful. But to really take off it might need to be the hot app on one of these hot phones. That probably should have been the iPhone, but without background notifications, it’s actually more compelling on Android.

Loopt is available for free in the Android Market.