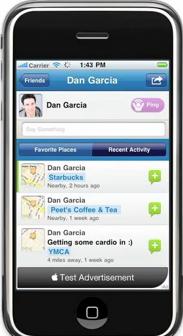 Loopt, an early leader in location-based services, today announced it has launched the next version of its application with several new features, including automatic check-ins, text messages, social recommendations, and rewards from businesses.

If you use any location apps, you may have experienced something called “check-in fatigue” — which just means you get tired of having to take out your phone and check in at every place you visit. The automatic check-in feature will now allow Loopt users to create small groups of friends or family who will have constant access to your location, without the need to work your way through an app’s interface.

The ping feature, which allows users to request another user’s location through the application, now allows the request to be sent via text message.

Loopt is also looking to use the large amount of user data it receives to more efficiently recommend locations and activities to users. For example, the app could tell you of a nearby cafe that is frequently visited by friends and might be a location you’d like to visit. Its recent integration with Facebook provides an additional amount of user information that may help with these types of recommendations based on the user’s network and activities.

Loopt previously launched Loopt Star, a separate application for its business-rewards program. Users were able to launch the application and see local businesses offering specials in their area, which they could redeem for checking in to the specific location. Loopt chief executive and founder Sam Altman told me that the app was originally launched to test users’ response to the program, and because of its success has rolled it up into the main Loopt app. Loopt Star will no longer be available as a standalone app.

With today’s updates, Loopt appears to be making a hard push to make the main Loopt application more robust and competitive with popular check-in apps Foursquare and Gowalla, who are already providing similar features. Gowalla just releases its own new version that most notably lets users integrate with Facebook Places and Foursquare.

The Mountain View, Calif.-based company, founded in 2006, currently has four location-based applications with more than 4 million users. Loopt has secured $17 million in funding and has around 40 employees.