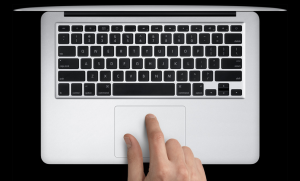 It sure would be handy if this darn MacBook Air had a backlit keyboard. We’re writing today from the disco-dark ballroom of the Palace Hotel in San Francisco during MobileBeat 2011. But soon enough, it may no longer be a problem for the Air.

AppleInsider says the new 11″ and 13″ MacBook Airs will have a backlit keyboard, leaving the low-end white MacBook as the only Apple notebook without the feature. The new Air will also have Intel’s Sandy Bridge processors and high-speed Thunderbolt ports, but, come on, it’s the backlit keyboard you really want.

Leaked product numbers obtained by 9to5Mac last week indicated Apple could refresh the Mac Pro and Macbook Air along with the debut of the company’s new Lion operating system. AppleInsider notes that Lion is on hold because of “last-minute security issues.” We’re checking in to that.

Back in the day, Apple only installed backlights in MacBook Pros. It was 2008 when MacBook Air started sporting the keyboard backlight, but it went away in October of 2010, causing many MacBook Air users to panic, as demonstrated in this post from Ars Technica. They were left in the dark when Apple never explained why it was removed.

Those backlight junkies could find solace in the Sony Vaio F series laptop, the Windows-based equivalent of Apple’s MacBook Pro laptops. It came out in May 2011 with a backlit keyboard.