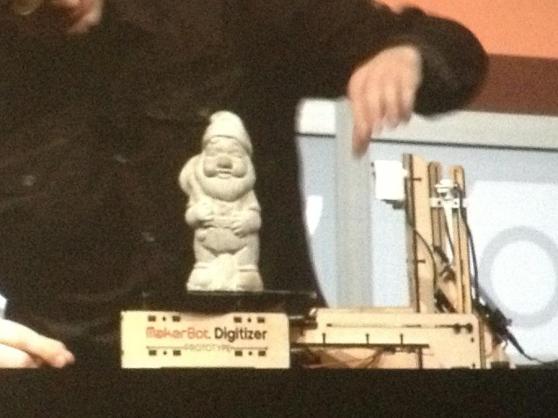 Forget printing objects — with its latest invention, MakerBot wants you to scan them.

Unveiled as a prototype at SXSW today, it’s new Digitizer Desktop 3D Scanner fills a major hole in MakerBot’s 3D printing ecosystem: Getting the objects you already have in the physical world into the digital one.

“This is sort of like the scene in Tron when they get digitized into the game,” MakerBot CEO Bre Pettis said during the device’s unveiling. “This kind of the washer-dryer combo of 3D printing,” he added.

With the device, owners can not only prototype new objects, but they can also re-create existing ones. The idea isn’t new, but MakerBot says it’s doing 3D scanning in a way that’s easy and accessible, which has been one of the company’s biggest strengths so far.

But like 3D printing, 3D scanning brings with it a whole host of copyright issues, all of which are likely to give manufacturers the vapors. Just because consumers can scan their property, does that mean they should be legally allowed to? In many ways, 3D scanning is the most dangerous technology yet for anyone who makes a living creating widgets. MakerBot may have just opened up a can of worms — not only for others but itself as well.

“Yes, it’s possible for a MakerBot to make a MakerBot,” Pettis said. “But I’m cool with that.”