Mobile and social gaming ad platform Mediabrix says it’s found the key to monetize games — it’s those “breakthrough moments” when you beat a difficult level, win something great, or get completely and utterly stuck.

Those emotional moments can mean big money for app developers. 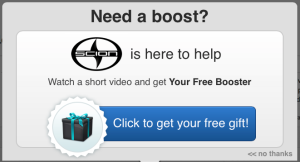 Above: An example of a MediaBrix in-game ad.

CPMs are the rates, per thousand viewers, that advertisers pay to display their ads in media and games. They’re notoriously low, requiring app developers to amass audiences of millions or tens of millions before adding up to any serious money.

Which, naturally, is hard. MediaBrix’ breakthrough moments, however, seem to be an exception.

“What we discovered after running hundreds and hundreds of ads campaigns was that by leveraging existing game mechanics, brands can come in helping users, rewarding users,” MediaBrix CEO Ari Brandt told me today. “They’re not interrupting them; they’re not an annoyance — they’re helping them. Ultimately, that’s the goal of the brand: to be remembered as a friend or a hero.”

The company’s ads are timed to hit just as a player accomplishes a goal — or is stuck trying to accomplish one. To celebrate the achievement and receive an in-game prize, or to get the power-up that the gamer needs, they simply views and possibly interacts with the ad. Not only are the ads coming at a moment of intense engagement, they’re also often delivering something the gamer very much needs or wants in the context of the game.

That makes them powerful, MediaBrix says. And that makes them an option for developers to adequately monetize games and social apps even with tens or hundreds of thousands of users. 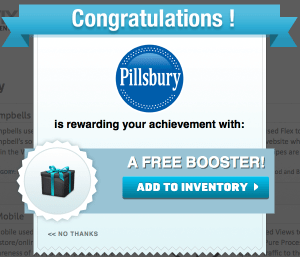 Above: Accomplish a goal? Here, have a free booster — such ads, MediaBrix has found, perform extremely well.

In fact, according to PuzzleSocial CEO Jeb Balise, the new ad unit is “bridging the gap between a gamer’s desire to play for free and the developer’s need to generate revenue.” Balise, who makes a mobile social crossword puzzle game, says that MediaBrix will account for half of PuzzleSocial’s revenue. The makers of the trivia game You Don’t Know Jack agree, saying that ads at breakthrough moments supply “the vast majority” of the revenue from its game, which has been downloaded more than five million times, and it offers them the “best eCPMs and user retention.”

Mobile monetization is a difficult problem that has hundreds of startups “hemorrhaging cash,” shared ride startup Sidecar founder Jahan Khanna told VentureBeat some months ago. It’s not easy, and there’s been plenty of skepticism in the past year about the sector, leading to some consolidation of ad platforms and analytics companies. But social networks like Facebook and Twitter have started to figure it out, with the majority of Facebook’s revenue moving to mobile and Twitter starting to see remarkable traction.

This new monetization strategy holds promise that those who have engaged users but perhaps not hundreds of millions of them can still make money.

“What brings up those CPMs is the value exchange,” Brandt says. “These are highly coveted moments … advertisers are willing to pay a premium for those units. In fact, we’ve been charging rates in this range for almost two years now, and we’re not getting pushback.”

What works for advertisers is also, not surprisingly, well-received by developers.

“Breakthrough Moments offer a much less intrusive approach to advertising and perform above average, because they appeal to people’s emotions and respect the user experience,” BitterByte Games cofounder Wallace Nogueira said in a statement. “Game players are willing to engage with the ads … and don’t skip ads or ignore them as we have seen them do with other ad types.”

MediaBrix is currently delivering more than 500 million breakthrough moment ads to more than 200 million people each month, the company says.