A new startup has launched this month with one raison d’être: to make group calling easier and more accessible on mobile phones.

Available for Android and iOS, Meucci works like other messaging apps, such as WhatsApp, insofar as you register for the service with your mobile phone number, and then you can message or call friends. But that’s where the similarities end.

Meucci doesn’t rely on your buddies having the app installed (though it is better if they do), instead it uses the names and numbers already in your address book to let you set up group calls with anyone over a standard GSM cellular network.

So you create a new group similar to how you would in WhatsApp, add the contacts, and then you’re pretty much good to go. 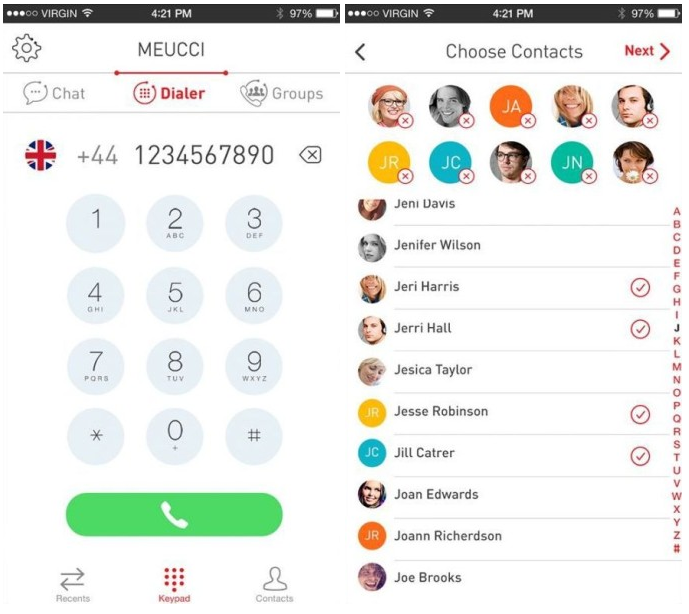 For group participants who have Meucci installed, the call will take place over the Internet (VoIP). Those who don’t have the app installed will receive an SMS message asking them to click a link, which will connect them to the call.

So the only person who really needs to have Meucci installed is the call instigator; everyone else can sit pretty and just use their regular mobile network. The app can also serve as a third-party client for your regular messaging and SMS-ing, though group chats will only show up as such for those with the app installed. 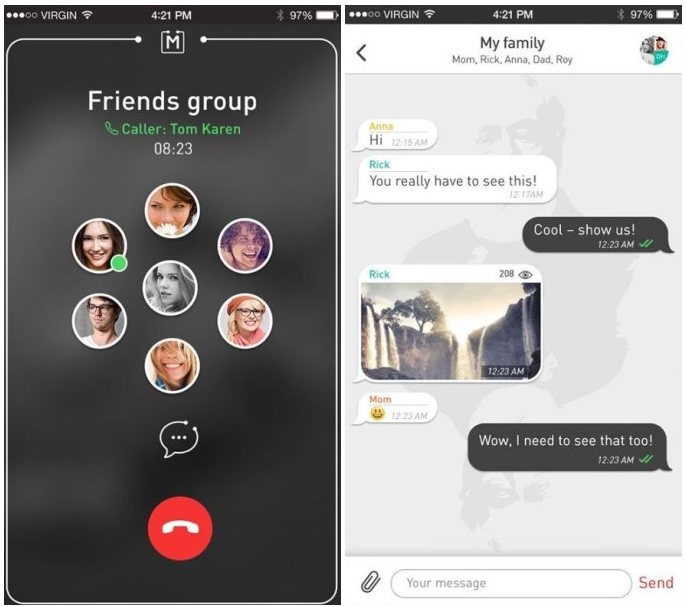 How does it work? Meucci explains somewhat vaguely:

We have figured out a way to make a connection between cellphones, no matter where they are in the world, using their own GSM networks. We serve as a mediator – making the link that connects one device to the other, without being dependant on anything other than existing connection. Meaning – you don’t have to waste your data or find a hotspot to use Meucci.

In terms of costs, it’s completely free if everyone in your group has the app installed, as it’s just VoIP, but you’re charged your usual carrier network rate for cellular calls. So let’s say you create a group with 5 other people in it, none of whom have the app, you’ll pay whatever it costs to call one person on your network, and it works with your usual monthly minutes allowance. In other words, you’re not charged five times, just the once. This also applies to international calls — you’ll be connected through a local number, with Meucci doing the spade-work in the background to connect the dots.

Based out of Tel Aviv, Israel, Meucci is also announcing a $6 million funding round today, with participation from Singulariteam, the VC fund cofounded by Moshe Hogeg — the same guy behind Mobli and Yo. Chinese funds Dragon Ventures and Xu Li also participated.

When pushed as to how the company plans to make money, a spokesperson remained rather coy, saying: “We are currently only focused on traction, and we promise the service will always be free for users.” But the company did say it would put its $6 million toward “developing other great features and [reaching] emerging markets that struggle with little communication options,” so a freemium model looks like the most obvious conduit for making money.

While other apps in the space already offer group calling features — including Skype and Line —  Meucci’s GSM-VoIP hybrid approach is certainly interesting. And with group calls thrown into the mix, it will be interesting to see what kind of traction it garners. Perhaps the idea lends itself best to markets where mobile Internet and Wi-Fi aren’t reliable.

“Today, group calling is plagued by dropped calls, people speaking over each other, and a bunch of other problems,” explained Rubi Kizner, CEO of Meucci. “It’s not uncommon for friends, families, and business partners to be spread out all over the world, and finding the right time and proper calling platform is already hard enough. We want to combat and solve this problem so distance has no meaning, and you don’t have to think, just call.”

Other companies and developers have tinkered with alternative messaging apps that work sans Internet. FireChat, for example, uses mesh networking to connect users via a peer-to-peer system that leans on Bluetooth, Wi-Fi, and Apple’s own Multipeer Connectivity Framework, though it doesn’t offer calls. But the technology requires a lot of users for it to truly scale, and it has yet to take off in a big way.

Perhaps a minor point worth noting here regards the company name. I’m a firm believer that brands should be easy to pronounce, spell, and remember, and I think “Meucci” misses the mark on all three, as I had to keep double-checking the name when writing and researching this. Plus, it sounds like something you’d cough up after one too many cigarettes.

But if you know your history, the name stems from the person some consider the inventor of the telephone — Antonio Meucci — though Alexander Graham Bell is generally credited with having invented the phone because he patented the technology.

Anyway, here’s Tony Soprano to tell you how to pronounce “Meucci.”