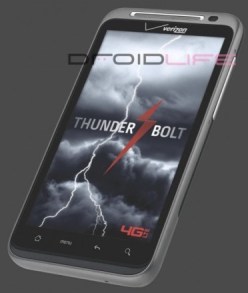 It looks like we won’t have to wait until next week’s Consumer Electronics Show to check out Verizon’s first 4G phone. HTC’s Thunderbolt Android smartphone was just outed tonight by the Android blog Droid Life.

From the looks of it, the phone is HTC’s Verizon spin on its popular Evo 4G device on Sprint. This time around though, it will be packing support for Verizon’s LTE 4G network, instead of Sprint’s WiMax 4G network. It’s somewhat fitting that Verizon’s first 4G phone would resemble the Evo, which was Sprint’s first 4G device.

The Thunderbolt will share the Evo’s massive 4.3-inch screen, but at the moment nothing is known about its internal specs. I expect that we’ll see many dual-core CPU phones at CES in Las Vegas next week, but I don’t think it’s likely HTC will manage to fit one into the Thunderbolt in time.

Last week HTC launched a site that teased it will be “the first to 4G, again”. Prior to that, several gadget sites received leaked photos of the company’s upcoming “Mecha” device, which looks exactly the same as the leaked Thunderbolt images.

We expect to get the full details on HTC’s Thunderbolt, as well as a slew of other smartphones, next week at CES.