Competition is heating up among a special breed of messaging apps: apps made just for couples.

As tech’s biggest names clamor over messaging services like WhatsApp, a quiet war is waged to capture the conversations you’re having with that special someone. The reasoning behind this war shouldn’t surprise; relationships require lots of conversation, and nowadays that happens by smartphone.

Lucky for us, four of the largest services in this space — Couple, Avocado, Between, and You&Me — are also the most candid. Stats provided to VentureBeat by these companies paint a picture of the space and how it’s poised to grow.

How the big names stack up

Among the top four couples messaging apps, Between is the largest by a landslide. As of May 19, the service has seen 7.45 million total downloads. Its userbase resides primarily in South Korea, Japan, China, and Taiwan.

Next up is Couple, with 2.5 million downloads, and Avocado, with 2 million downloads. HowAboutWe‘s budding messaging app, You&Me, is the youngest and smallest of the bunch, with 143,514 total downloads (less than three weeks post-launch). You&Me, specifically, is worth watching in this race due to HowAboutWe’s 3 million-strong userbase.

The growth of couples messaging apps by year 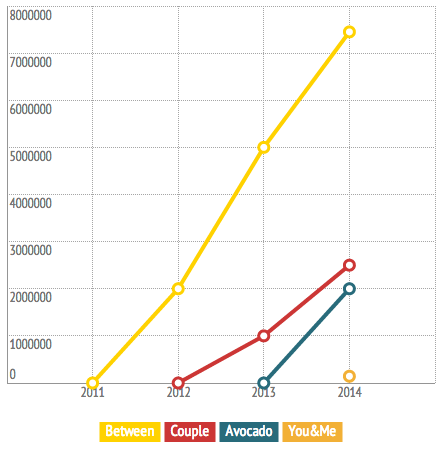 Yet a look at U.S. App Store data provided by app tracking company AppAnnie shows that You&Me leads all apps by daily downloads in the U.S. for the moment. Of course, You&Me’s position in the App Store charts may not last as launch-related hype subsides.

Globally, these apps still cannot hold a candle to most general messaging apps. Even among the top U.S. apps overall, only You&Me and Couple are large enough to track.

You&Me’s early success suggests it could grow significantly in the coming weeks. Between’s large international user-base, on the other hand, makes it most easily comparable to messaging giant WhatsApp — although WhatsApp’s 500 million users make it more than 67 times the size of Between.

In the context of this niche category, however, Between’s size is noteworthy. And despite its niche, the potential market for apps like Between is just as large as it is for WhatsApp. As long as humans keep pairing up, there’s no shortage of potential users.