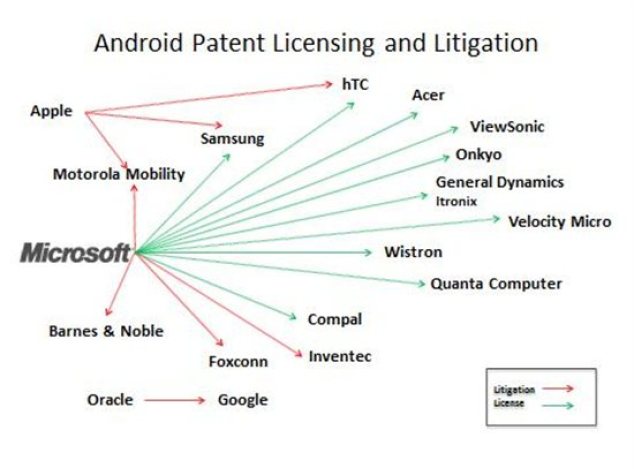 Yah, you read that right. As of today, Microsoft’s patent licensing agreements with Android manufacturers now cover more than half of all Android devices,  thanks to the recent addition of Taiwan-based Compal.

Compal is the tenth company to form an Android licensing deal with Microsoft, and it’s joining more well-known Android manufacturers like Samsung, HTC, and Acer. Companies get protected under Microsoft’s patent portfolio for a fee, which protects them from further patent litigation from Microsoft, as well as from others (like Apple).

“Amidst continuing clamor about uncertainty and litigation relating to smartphone patents, we’re putting in place a series of agreements that are reasonable and fair to both sides,” wrote Brad Smith and Horacio Gutierrez, Microsoft’s general counsel and deputy general counsel, in a blog post today. “Our agreements ensure respect and reasonable compensation for Microsoft’s inventions and patent portfolio. Equally important, they enable licensees to make use of our patented innovations on a long-term and stable basis.”

Microsoft boasts that it has spent over $4.5 billion in the past decade to license patents from other companies — a figure that shows the company’s dedication to respecting intellectual property rights, according to Smith and Gutierrez. The big takeaway here: Microsoft respects IP by licensing responsibly, so it expects other companies to do the same.

With the Compal deal, Microsoft says it now has licensing agreements with 55 percent of Android Original Design Manufacturers (companies who build Android devices for other companies). Microsoft also says that its agreements now cover 53 percent of the US Android smartphone market, thanks to its recent massive Samsung deal.

This latest milestone means that Microsoft is even further intertwined with Android’s success, since it’s earning money for every Android device sold from its partners. Back in May, we said we suspected that Microsoft was making five times as much from its Android licensing deals than Windows Phone — now, that figure is likely much higher.