Microsoft has revealed a new Phone Companion app for Windows 10 today, designed to help users connect their PC to whatever smartphone they use — Windows Phone, Android, or iOS.

Additionally, Microsoft also confirmed that its Cortana digital assistant app will arrive for Android and iOS, having previously only been available for Windows devices.

The Phone Companion app will be built directly into Windows 10 — Microsoft’s new operating system that’s expected to launch for the public this summer — and it’s designed to help users sync up content between their PC and mobile phone. It basically offers an easier way to access existing functionality, such as setting up Microsoft’s OneDrive cloud-storage service to work across your devices. This means that files such as photos you snap, notes you take (OneNote), and documents you edit (Office) are available on all your devices.

But more than that, you’ll also be able to access music stored in your OneDrive account, including any playlists you’ve created on Windows 10, across all your devices. This feature was already available to Windows Phone users. 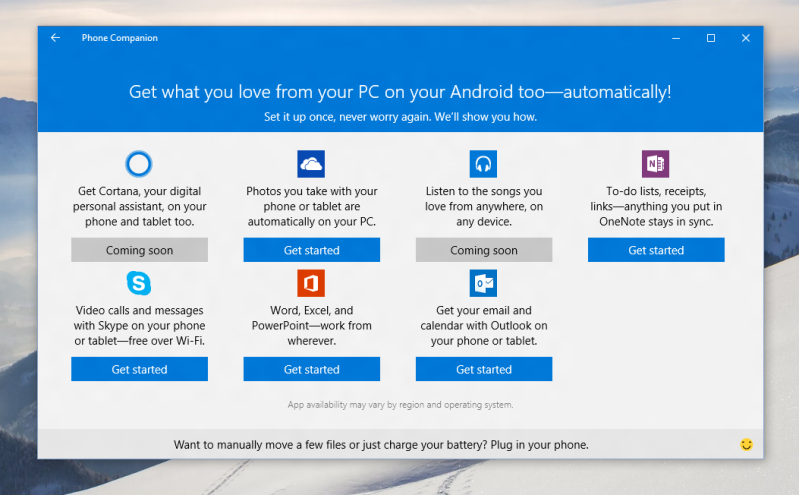 With Microsoft struggling to gain a solid foothold with Windows Phone, even in the wake of its Nokia Devices acquisition, the Seattle-based company has been refocusing its efforts on software.

This has meant catering heavily to Android and iOS and doubling down on its efforts in the PC sphere — a realm where Windows still rules the roost. And this is why Microsoft is looking to help those on Android and iOS (the vast majority of the smartphone market) sync all their files and documents across their devices. It also helps encourage users to move over to a Microsoft OneDrive subscription.

Microsoft’s Cortana digital assistant has been likened to Apple’s Siri in the past, in that you can ask it questions and get it to remind you to do certain things. The Cortana companion app will basically serve as a bridge for things you start doing on your laptop and wish to continue later. There will be some limitations with Cortana on Android and iOS though, simply because of access restrictions to the respective mobile operating systems. This means you won’t be able to complete actions such as opening apps, which requires a specific integration with a device’s microphone.

Those who join the early-stage Windows Insider Program will be able to try out the Phone Companion app in a few weeks, while the Cortana companion will launch on Android phones at the end of June, followed by iPhones “later this year.”