The rumors were true: One of Microsoft’s new PCs sports an ARM-based chipset instead of an Intel equivalent. During an event in New York City this morning, the Seattle tech giant unveiled the Surface Pro X, the spiritual successor to the Surface, the Surface 2, the Surface 3, and the Surface Go. It’s ultra-slim and lightweight, with a bezel-to-bezel 13-inch display and an adjustable kickstand. And it’s the first machine to ship with a custom-designed, ARM-based Microsoft SQ1 system-on-chip co-engineered with Qualcomm.

The Surface Pro X will be available on November 5, starting at $999, and Microsoft will begin taking preorders today.

The first thing you’ll notice about the Surface Pro X is its thinness and lightness. Propped up next to the new Surface Pro, it’s positively diminutive at 1.68 pounds and 5.3 millimeters thick. That’s fortunately not the case with the front-facing camera and front panel, the latter of which is the largest yet on an ARM-based Surface device.

On the display front, you’re looking at a PixelSense panel with 2880 x 1920 resolution with a 267-pixel-per-inch screen density and a 1400:1 contrast ratio. Microsoft says it has the thinnest bezels of any 2-in-1. 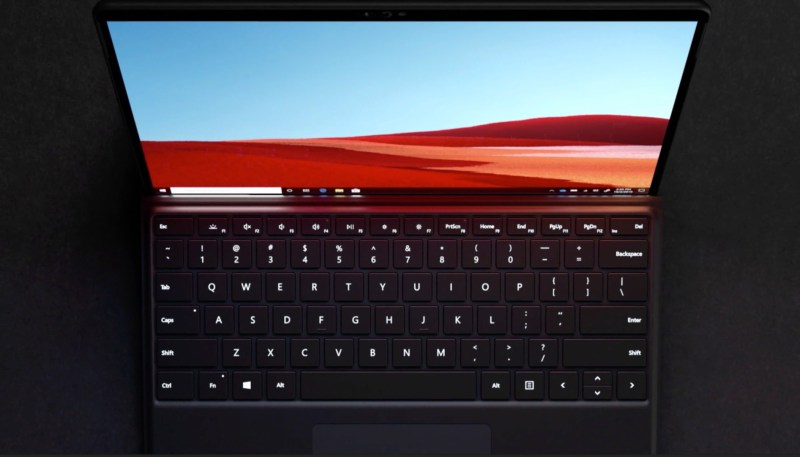 Moving to the sides and rear, the Surface Pro X retains a volume rocker and power button but swaps its predecessors’ USB-A and Mini DisplayPort connections for dual USB-C ports. There’s a magnetic attachment for Microsoft’s Type Cover keyboard toward the bottom — beneath the screen — and rounding out the back is a rear-facing camera.

On the connectivity front, the Surface optionally taps into 4G LTE Advanced for data on the go, and it’s fully compatible with the new wirelessly charging, tilt-sensitive and NFC-equipped Surface Slim Pen. Last, but not least, it supports fast charging via the included charger.

Under the hood, the Surface Pro X — which lasts around 13 hours on a charge — sports the aforementioned 7-nanometer SQ1, which Microsoft says delivers more performance per watt than the chip in the Surface Pro 6. It’s an octa-core processor Qualcomm-designed Kryo cores clocked at 3GHz and running at 7 watts maximum, sitting alongside a redesigned GPU and integrated AI accelerator.

On the software side of the equation, the Surface Pro X’s highlights are probably the attention and stylus features. The former taps AI to adjust the appearance of your eyes so it seems you’re looking straight at the camera when you’re on a conference call. And pulling out the Surface Slim Pen triggers a new context menu with shortcuts to apps, like Whiteboard or inking up screenshots.

“We’re reimagining many of our products to extend them from the desktop to mobile products,” said Scott Belsky, chief product officer at Adobe, onstage today. “We know that millions of our customers use Creative Cloud on Windows. More than half of Surface Book customers today are Creative Cloud customers.” 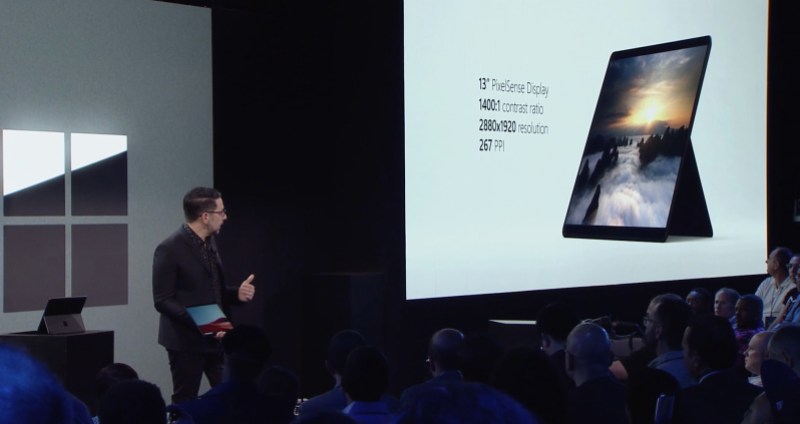 It’s worth noting that apps compiled for Intel’s x86 instruction set don’t run natively on ARM-based Windows devices like the SQ1 processor. They require an intermediary layer dubbed WOW64, which compiles blocks of x86 instructions into ARM64 instructions with optimizations to improve performance.

That said, a number of apps have been recompiled — or are in the process of being recompiled — for Windows 10 on ARM. The popular game engine Unity is among them, as is Netflix, VLC, Hulu, Pandora, Spotify, Vudu, and Microsoft’s own Edge browser based on Chromium compiled for ARM. Yet another that recently climbed aboard the ARM bandwagon is Electron, the cross-platform app development system underlying apps like Slack, Discord, Microsoft Teams, and Spotify.

Remaining holdouts include browsers like Google’s Chrome and Mozilla’s Firefox, but with any luck the new Surface Pro X flagship positioning will usher in a fresh wave.