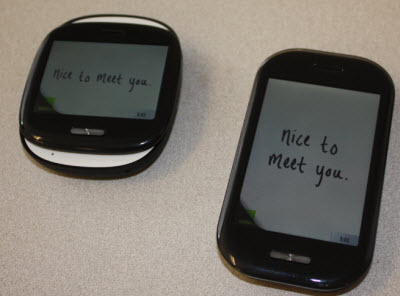 Hoping to grab a piece of the smartphone business, Microsoft began selling the two flavors of its Kin cell phones on Verizon Wireless’ web site today.

The main appeal of the Kin One and Kin Two phones is their integration of social media. If you want to share your life with everyone in the world, the Kin phones are good for that.

But it’s going to take a big investment for Microsoft to gain share against Apple’s iPhone at this point, which has a 50-million unit lead. Perhaps the best the Kin can do is give the Palm Pre a run for its money, but even that will be an uphill battle now that Hewlett-Packard has agreed to buy Palm.

Kin phones are a nice experience, but not as nice as an iPhone in a lot of ways. The Kin, for instance, features a total of 12 apps. There’s something like 180,000 available for the iPhone. You will, at some point, be able to download apps over the air to the Kin phones.

If any company has shown a willingness to slog through the marshes, gaining users little by little, it’s Microsoft. It has done well with the Xbox 360 video game console, selling 40 million units and surpassing Sony’s PlayStation 3 to take second place behind Nintendo. But its Zune media player has been a poor performer against Apple’s iPod. 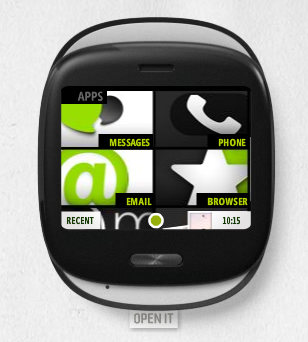 Microsoft’s real attempt to unseat the iPhone arrives this fall with the Windows 7 Phone operating system. But the Kin is a pretty targeted and well conceived jab at the teen market. That’s not a surprise, since the Kin traces its heritage to Danger Research, which Microsoft bought in 2008 and which made the popular Sidekick phones for teens. Microsoft has done a good job integrating location-based Bing search into the device, but, of course, you can’t choose to use Google unless you want to go through the browser interface. The overall design is good, and it shows what a company can do when it controls the hardware, software, and operating system for its phone.

Microsoft is starting out with a price that is realistic for teens and young people. The smaller Kin One is $49 after a $100 rebate if you sign up for a two-year contract. And the Kin Two is $99 with the same kind of deal. On May 13, the phones will be available in Verizon Wireless stores. The Kin One is pudgy, the Kin Two is tall. Verizon Wireless talk plans start at $39.99 a month and unlimited data plans are $29.99 a month.

The phone set-up process is easy. Upon charging and turning it on, you see a “Nice to meet you” message. Then you enter your name and start setting up your social connections. You can type in a Windows ID if you have a Hotmail or MSN account. Then you can enter the logins and passwords for your Twitter, MySpace, Facebook, and email accounts. The phone then automatically pulls in your contacts and matches them with pictures, much like the Palm Pre does.

Each of the phones has a full slide-out QWERTY physical keyboard. The Kin One has 4 gigabytes of internal memory, while the Kin Two has 8 gigabytes. The Kin One comes with a 5-megapixel camera and the Kin Two has an 8-megapixel camera and a high-definition video camera. Both come with a zoom feature that you use by pressing the volume buttons. They both have a good LumiLED flash for the camera as well. 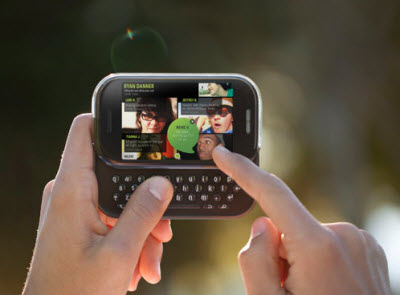 The touchscreen is somewhat responsive, but it could be more sensitive to touches. You can swipe downward on it to see the screen spin downward, letting you view images on what Microsoft calls its Loop interface on the home screen. The Loop is where you see all the postings of your favorite people or news feeds. It’s easy to view the Facebook status updates, Twitter messages, news and other social media with a touch of the finger. By scrolling down the Loop interface, you can see the images of your friends slide by along with their updates.

Kin phones also incorporate Zune music, video, FM radio and podcast playback. With a Zune Pass subscription and Zune software on a PC, you can buy and listen to millions of songs from the Zune Marketplace.

You can share almost anything with a friend by dragging it into the Kin Spot, which is a dot on the screen that will automatically pull up an interface for sharing when you drag a photo into it. You can share a photo with people on your favorites list in a matter of seconds.

These phones are aimed at tweens and teens — hence, the keyboards for sending text messages. I picked one up today and checked it out. My teenager immediately started quizzing me about it when I brought it home. There’s nothing particularly stylish about these phones, which Microsoft executive Robbie Bach described as “couture software” when he announced them a short while ago. 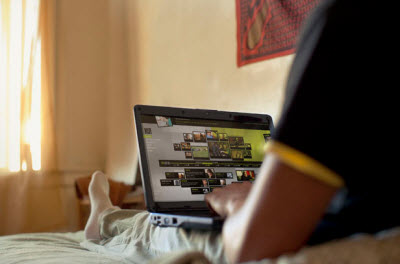 Verizon will be the exclusive wireless partner for the new Kin phones in the U.S., and Vodafone will carry the phones in Germany, Italy, Spain and the United Kingdom this fall.

Online, you can use a more sophisticated interface known as the Kin Studio. You can set it up so that you can see photos, which are organized chronologically and viewable on maps. You can view almost everything on your phone and make sure it is backed up to a private, password-protected web site. Storage is virtually unlimited.