Two months ago, Microsoft launched a limited release version of its Sway presentation app on iPhone in New Zealand. Now company has finally started rolling the app out internationally — including in the U.S.

To recap, Sway launched originally on the Web back in October as a restricted Preview version, though it was opened up to everyone last month. It’s a tool that automatically creates presentations out of users’ text, pictures, and videos. It’s kind of like a souped-up version of PowerPoint.

Microsoft has been clear thus far that the product is a work-in-progress, with Michael Atalla, director of product management for Microsoft Office, telling us at launch that this was the “beginning of a journey,” and “it isn’t complete.”

This was evident with the introduction of the iPhone version back in November, with New Zealand serving as the sole launch market, followed by Australia a month later. Today, however, Microsoft is rolling the app out to a slew of English-speaking markets, including the U.S., Canada, U.K., India, South Africa, and Ireland. 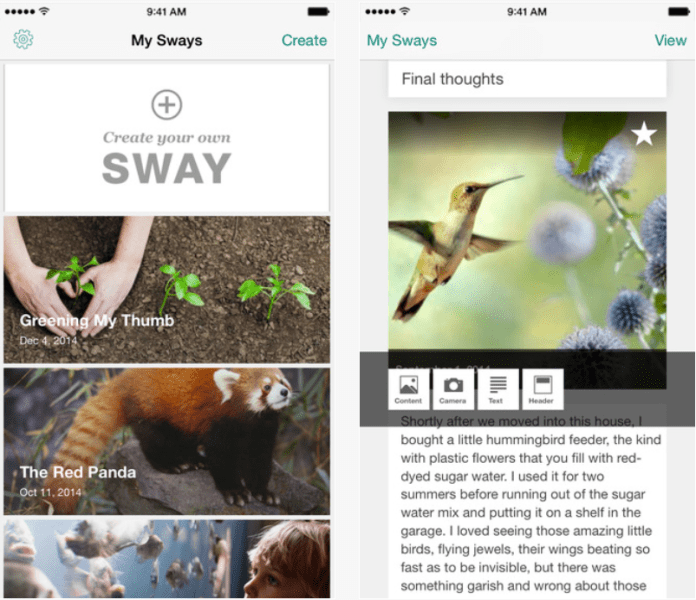 Microsoft has often faced criticism for being slow to embrace the Web, but it has been making moves to shake off its desktop shackles, with Office Online now a core part of its offering.

Sway is a notable move from the computing giant, insofar as it’s clearly a product in the mold of its flagship Office software, except this is built purely with the cloud in mind. No pesky file-formats — just URLs, embeds, and other Web-friendly sharing features.

Though this is of course a native iPhone app, it’s still built with the Web in mind. While you can create interactive, multimedia skits from content on your device, the final creation can be shared across social networks and email and viewed online by anyone. The recipient doesn’t require a Sway account or any additional software.

As with many Microsoft launches, the company has ignored its own mobile operating system for this launch, though it has previously promised a version would eventually arrive for Windows Phone as well as Android.

The app — and the broader Sway service in general — technically remains in Preview mode for now. Microsoft is merely seeking to expand its early user-base to iterate and improve the product.