Microsoft’s $3,500 enterprise augmented reality headset HoloLens 2 had a somewhat longer path to market than expected, debuting last February and actually beginning shipments in November despite suggestions of an earlier release. Now Microsoft is confirming that it’s looking into reports of display problems from a growing number of early adopters, though it’s unclear at this stage whether the problems are hardware, software, or user specific.

While HoloLens 2 redesigned many of the original model’s components, one of its most important new features is a new AR display with a higher resolution and larger field of view than before. According to Microsoft, the display projects an image onto the back of a user’s eyes rather than in front of it, using an eye-tracking system to correct the image for comfort and color. That said, as the distance increases between the display and the eye’s pupil, apparent image quality — including color uniformity — will typically decrease.

According to a Microsoft spokesperson, while the “new type of display” uses “a set of balanced display trade-offs” to achieve its performance — trade-offs that might, as suggested above, lead to some variation in experience based on factors such as eye distance — the company is looking into complaints about the displays themselves. “We are aware of reports from some developers experiencing issues with their displays,” the company told VentureBeat, “and we’re working closely with them to understand the underlying cause.”

The reports have been growing for weeks in Reddit threads (via RoadtoVR), before and after a statement from Microsoft’s Alex Kipman discussing some of the characteristics of HoloLens 2’s display technology — and warning against making unwarranted assumptions from single-lens camera-captured images of the binocular display. Photos of profoundly rainbow-tinted HoloLens 2 display output have been circulating online, but users familiar with the problems suggest that the actual displays either exhibit bands of color, fragments of color, or a “weird brown-ish tint,” with apparent variations from headset to headset rather than a consistent problem across all units. 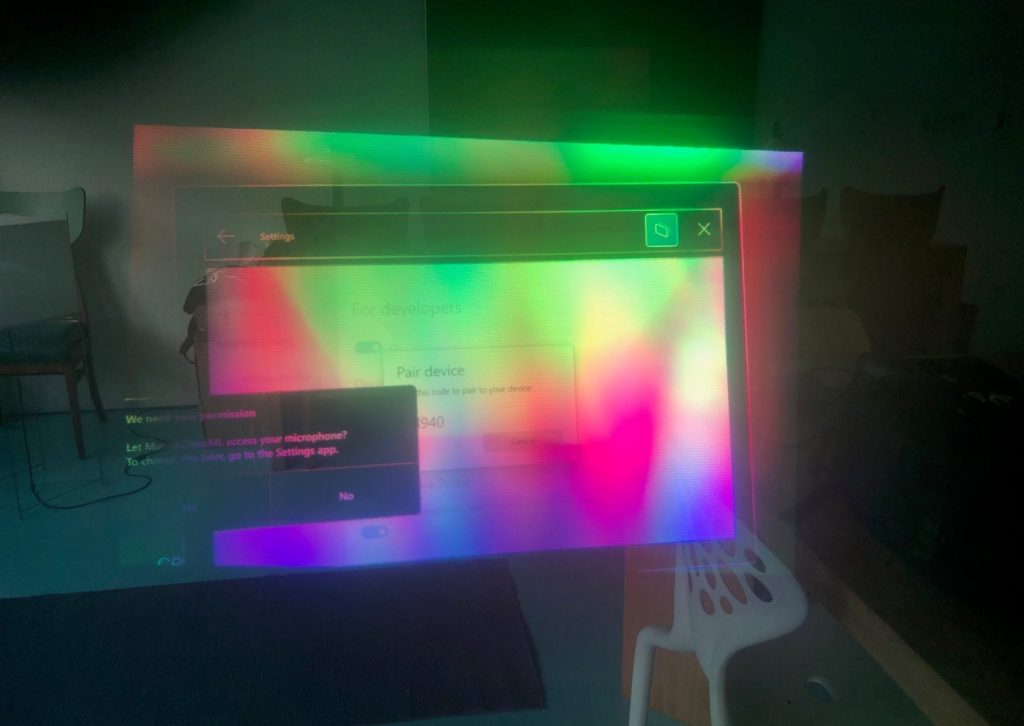 Above: Twitter user @cesarberardini posted images depicting rainbow-like display issues with HoloLens 2, but Microsoft says this isn’t a fair representation of the display.

Redditors with the issue have offered different views on how much the display issues impact use of the headset. One user suggested that color fragments made white screens on 2D apps “awful to look at,” while another said that “ours rendered text completely unreadable” and made content behind bands of color indistinguishable, including in HoloLens-specific apps. That said, there are likely thousands of headsets now in the marketplace, apparently including many without problems, while others are believed to deviate in various degrees from the norm.

It remains to be seen how widespread the problems are, and whether they will be correctable via software or some form of user calibration. HoloLens 2 is presently available only through a handful of Microsoft enterprise partners, and some customers on Reddit are continuing to report lengthy delays in sourcing headsets — months, with some projected deliveries stretching into May 2020. Microsoft did not respond when asked whether HoloLens 2 production has been paused or adjusted to address the apparent display issues, but we’ll update this article if the company has more to share in the immediate future.