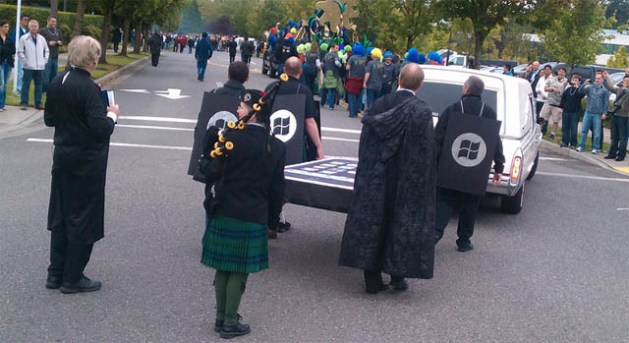 Pretend you’re Microsoft. You’ve just finished working on your hot new mobile operating system, Windows Phone 7, and it’s now ready for manufacturer consumption. Clearly, a celebration is in order — and what better way to celebrate than by dancing on the graves of your competitors?

I figure that was the thought process going on at Microsoft when employees arranged a funeral parade for Apple’s iPhone and Research in Motion’s BlackBerry earlier today, which Neowin reported on. And as with any mock funeral these days, everyone just has to burst into a “Thriller” dance (see video below).

Conspicuously absent from the celebrations was Google’s Android platform.

I’m not going to read too much into a mock celebration by a company that’s historically failed at humor, but it does seem as if Microsoft may be relegating itself to a position behind Google’s mobile platform. Just today, Gartner reported that Android has become the No. 2 mobile platform globally. I wouldn’t blame Microsoft for taking that stance — Android, through its sheer ubiquity across carriers and mobile manufacturers, is poised to become the dominant smartphone platform worldwide within a few years.

There was one Android phone on site, however, TechCrunch reports. Microsoft employee Carl J took quite a few photos of the event, and his Flickr pages reveals that he was using an HTC Evo 4G.

In other Windows Phone 7 news, CNet has confirmed that Microsoft will announce its official launch date at a New York “open house” event on October 11. Expect to see even more news about Windows Phone 7 as we approach the event.