Microsoft has officially launched Cortana for Android and iOS — but only in the U.S. and China.

The computing giant first revealed plans to introduce its Siri-like Windows digital assistant to other mobile platforms back in May — the Android public beta kicked off in August, followed by a limited beta rollout on iOS last month. 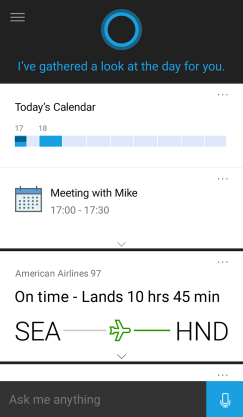 The app is effectively a companion to Windows 10 machines, letting you start and finish tasks across devices, receive reminders, track key information (such as flights), get missed-call notifications, and more.

The new Cortana app is available for iOS 8 and Android 4.1.2. and above, in just those two countries. Interestingly, it is also compatible with the OnePlus One Android phone which runs on Cyanogen OS — this is OnePlus’s first flagship phone, which was replaced by the OnePlus 2 earlier this year. Other Cyanogen OS devices will be added in early 2016.

While Cortana for iOS and Android are designed to extend the digital assistant’s functionality beyond Windows and onto other platforms, there are some features available on Windows phones that won’t work elsewhere — such as saying “Hey, Cortana” to activate Cortana hands-free.