Microsoft has launched a new mobile app designed to help you find local service professionals, from plumbers and electricians to car dealers, and more. 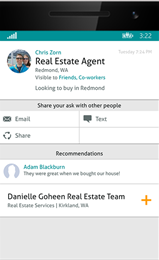 Home Team is the latest in a long line of apps to emerge from the vaults of Microsoft Garage, the computing giant’s lab for experimental tinkering. However, Microsoft has opted to limit this app to Windows Phone, in contrast to most of its other recent launches.

Back in July, Microsoft Garage launched a new polling app for iOS and Android, shortly before it introduced a lightweight email app for iPhone, called Send, which later arrived for Android, as well. Elsewhere, the company rolled out Snipp3t, an iOS-only app that gathers celebrity news from across the Web. Then there’s the Next Lock Screen app for Android and Picturesque, another lock screen app designed with Microsoft’s Bing search engine in mind. Journeys & Notes, on the other hand, is a social travel app that seeks to connect a community of users who have traveled on similar routes.

Home Team is all about finding the best “local contractors and repairmen” that come with “a stamp of approval” — this is about word-of-mouth recommendations between friends and family, rather than reviews from the general public.

With Microsoft long on the back foot in the mobile realm, it hasn’t been investing quite as much in the Windows Phone ecosystem of late — in fact, it has rather a lot of apps that exist on other mobile platforms but not on Windows Phone. So it’s interesting to see it roll out a Windows Phone-only app, even if it is just an experiment. It’s safe to say that if the app garners enough favorable feedback through the testing phase, it may find its way onto other mobile platforms, too.