Microsoft has launched a new standalone email app today called Send, available only for iPhone users in the U.S. and Canada for now. 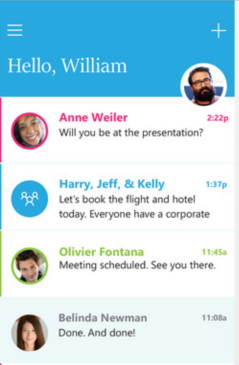 Rumors first emerged of such an app back in May, though it was originally believed it would be called Flow.

It’s clear that Microsoft doesn’t want to cannibalize its main Outlook email app with this latest offering — the company said it’s looking to target those situations when you just need to send snappy messages to coworkers.

With Send, Microsoft is doing away with subject lines and signatures — it’s all geared towards short-form conversations. So rather than using this for sending notes from meetings, it’s more about imparting key facts or asking quick questions such as “I’m running 10 minutes late” or “Where is the meeting being held?”

And while it does kind of resemble text messaging, it’s linked in with a user’s Outlook account, tapping email addresses rather than mobile phone numbers.

Besides the initial geographic and platform restrictions, the Send app will also only work for those with Office 365 business and school email accounts, though once Microsoft has garnered feedback it does plan to open things up “in the coming months.” It will also be launching for Android and Windows Phone.

Send is the latest in a long line of apps to emerge from Microsoft Garage, the software giant’s lab for experimental tinkering.

Today’s launch comes less than three weeks after Microsoft launched Tossup, an app designed to help you create impromptu polls around events. Other Microsoft Garage projects include Snipp3t, which launched in August of last year, the Next Lock Screen app for Android, and Journeys & Notes.

Given that Send is a Microsoft Garage project, it may never actually become an official Microsoft product. But it does actually seem like quite a good idea for mobile-centric workplaces — and despite losing market share elsewhere in the consumer realm, Microsoft still holds significant mindshare in the enterprise.