Microsoft is continuing a growing trend among U.S. technology companies with its efforts to target the fledgling Indian smartphone market. 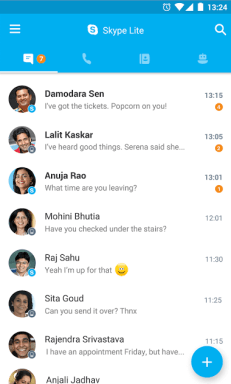 At the Future Decoded conference in Mumbai earlier today, Microsoft CEO Satya Nadella formally launched a brand new version of Skype that the company has built specifically around the needs of those living in India.

Available only on Android for now, Skype Lite is a smaller and lighter version of the popular communication app, one that consumes less data on calls (video or voice) and messages. Using less data means that users may spend less money, but, more importantly, it means that it should also perform more reliably on low-bandwidth networks such as 2G, or where patchy network conditions exist.

Skype Lite also comes bundled with a number of new features, including SMS filtering to help users remove promotional texts from their inbox.

In the coming months, Microsoft says that it will also soon add support for Aadhaar, the controversial 12-digit number assigned to each citizen to help identify them using biometric and demographic data. The system was set up by a government agency known as the Unique Identification Authority of India (UIDAI). Last summer, Samsung launched the $200 Galaxy Tab Iris, a tablet that uses eye-scanning smarts to authenticate individuals. And by June this year, Skype Lite will allow users to verify unknown callers, which may prove useful where the ID of the caller is important, such as for job interviews.

It’s estimated that less than 20 percent of the Indian population own a smartphone, however that figure is changing fast, with some reports indicating that India is about to overtake the U.S. to become the world’s second-largest smartphone market in terms of units shipped. As such, India is becoming a key battleground for U.S. technology giants, with Google investing heavily in various initiatives, including an India-focused “offline first” YouTube app.

Facebook has also been showing significant interest in India, while Apple is expected to begin manufacturing the iPhone in India in April, and BlackBerry recently signed a licensing deal to sell smartphones across the region.