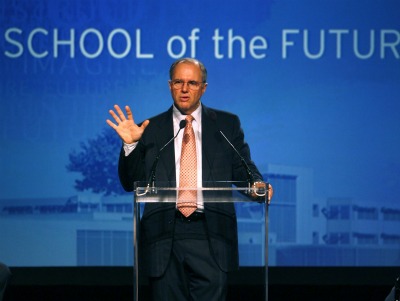 Microsoft chief research and strategy officer Craig Mundie isn’t afraid to go against the grain when it comes to tablets.

Speaking at a lunch in Sydney, Australia, Mundie said he was unsure if tablets like the iPad would stick around, the Sydney Morning Herald reports. He went on to discuss how he viewed the future of computer interfaces, which included entire rooms replacing the traditional desktop.

Mundie’s big beef with tablets, it seems, is that he’s unsure if the space between mobile devices (smartphones) and traditional mobile devices (laptops) will continue to exist. Tablets now hover in that nether space, which is constantly under attack from larger and more powerful smartphones, as well as cheaper ultraportable laptops.

Despite the massive growth in tablets at the moment, mainly due to the iPad, it’s definitely worth questioning just how useful these devices will be in the long term. In my apartment, I have both an iPad and a Samsung Galaxy Tab for testing, but I rarely pick either one up for casual web browsing. Of course, the situation is probably different for consumers who don’t make a living working on the Internet.

Mundie’s hesitation around tablets may be why Microsoft has been so slow to adopt a tablet initiative that doesn’t involve desktop versions of Windows. As I’ve argued previously, Microsoft already has a decent tablet solution in Windows Embedded Compact 7, its consumer electronics OS that will also serve as the basis for future Windows Phone updates. But the company has, for some reason, avoided developing an operating system specifically aimed at tablets. Its plan now is to integrate tablet functionality into Windows 7 and 8 — which is basically what Microsoft has been doing for years.

He also discussed a cool next-generation technology that Microsoft is working on. When looking at a phone, “instead of seeing a screen, it can beam individual rays of light into your eyes right on your retina … [so] you can look at your phone and see HDTV.” Such a technology would be useful for watching movies and playing games from your phone. And it could replace tablet functionality for some users.

When it comes to the future of desktops, Mundie said: “I believe the successor to the desktop is the room, that instead of thinking that the computer is just something on the desk that you go and sit in front of, [in the] future basically the whole room is the computer and you go in it.”

Mundie pointed to Microsoft’s popular Kinect Xbox 360 accessory as a way to enable a room-based computing environment. The Kinect has 3D cameras to track your body’s motion, which makes it uniquely suited for more interactive computing environments. Eventually, it could be used to deliver personalized health care and education to remote areas, he said.