Having your smartphone run out of juice during the day is an annoyance that most people solve by trying to remember to charge their device overnight. Even then, that’s sometimes not enough, and charging throughout the day is sometimes necessary. Microsoft Research has devised a potential solution: AutoCharge.

Microsoft researchers Yunxin Liu, Zhen Qin, and Chunshui Zhao in Beijing describe (PDF, via WinBeta) AutoCharge as an approach that automatically locates a smartphone on a desk and charges it. Their prototype charger, which you can mount on a ceiling, works in two ways: a detection mode that uses a Microsoft Kinect camera to scan for smartphone-like objects, and charging mode that uses an UltraFire CREE XM-L T6 Focusing LED Flashlight torch. 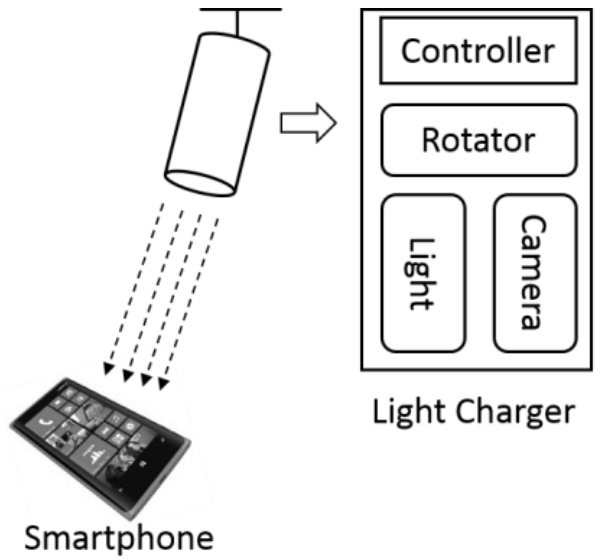 The AutoCharge system employs image-based processing to detect and track smartphones on a desk for automatic smartphone charging. The charger rotates until it detects an object that looks like a smartphone, at which point it uses solar charging indoors to remotely charge a smartphone using a light beam. In other words, look ma, no wires!

AutoCharge communicates with the smartphone via BlueTooth or an on-phone LED. This ensures charging stops when the battery is full as well as making sure objects similar in size and shape to smartphones aren’t “charged.” The system can also shut down automatically (in just 50 milliseconds) when it recognizes that an object has moved between it and the smartphone. 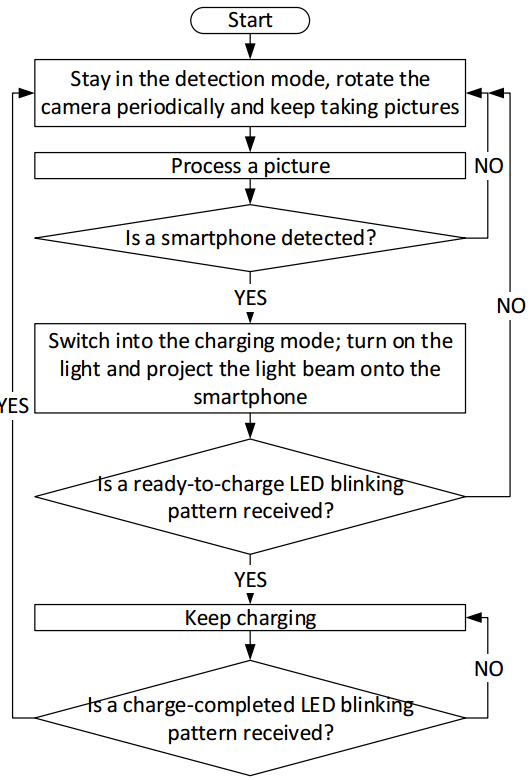 Second, as the radio frequencies used in wireless power are much lower than the frequencies of lights, it is hard to emit the radio waves within a straight beam. This causes energy waste if the receiver is not large enough and makes it hard to ensure safety. Using high frequency radio waves like x-rays can solve this problem but x-rays are harmful, leading to more severe safety issues. In addition, when used in a long distance (e.g., meters or longer), the power transmission efficiency of wireless power is low. Wireless power is still under active on-going research in terms of transmission efficiency, safety and transmission distance. We believe that it takes more time for wireless power to become mature enough to be used in users’ living spaces for long-distance power transmission.

This is why AutoCharge relies on solar power techniques, which are much more mature, can be transferred in a straight beam, and are much safer for human bodies. Although AutoCharge is still a prototype, the researchers claim devices are detected “within seconds” and can be charged wirelessly “as fast as existing wired chargers.” The researchers thus conclude their experimental results show automatic smartphone charging is feasible. That said, this is by no means a foolproof solution (smartphones don’t currently ship with photovoltaic panels).

The best way to really address the problem would be to stop releasing slimmer devices and just give them bigger batteries, especially as smartphones continue to get bigger and more powerful. Alas, manufacturers don’t seem interested in such an approach, making research like the above quite exciting.